I admittedly don't know much about The Police. Growing up I heard many of their hits on the radio throughout the 80's, but honestly never sat down and listed to a full album from them. Well, at least until today that is.

Zenyatta Mondatta, or He Said It, as it is translated in Hungarian, is The Police's first entry into the 1980's. It's notable for featuring such hits as; Don't Stand So Close To Me  and De Do Do Do, De Da Da Da, both of which charted between 1980 and 1981. 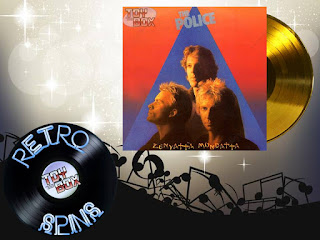 De Do Do Do, De Da Da Da was the first track to chart for the album. It slowly began its assension up the charts in mid 1980 and capped at the number ten spot in January 1981 where it stayed for two consecutive weeks. Ironically, Don't Stand So Close To Me somewhat mirrored this same success. It made it to the number ten spot by April of 1981 and sat there for three consecutive weeks in a row before being bumped all the way down to number fourteen where it would continue to slip down until it eventually fell off.

As a whole, the album is peppy. It's got a funky reggae / pop feel to it and it's enjoyable. However, there's no denying why the hits are the hits. If I could call out one additional track, Canary in a Coalmine, definitely had the makings of a hit for the band. Unfortunately and for whatever reason, this was not the case.

I admittedly have never been a big fan of the police or the band of the same name. Ha, jokes. Seriously, though...Not a joke.

Anyway, after a moment of awkward pause while typing, The Police have good songs here and there (as a whole) and as someone who actually owns every album from them, but as mentioned above, has never listed to any until today, I'm honestly looking forward to hearing some more from them. After all, they must have been doing something right to have released five albums between 1978 and 1983 before Sting went solo and launched himself even further into musical stardom. I won't be listening to any more of their music today, but I'll definitely be getting around to it.

Click "HERE" to go back to the home page. For more posts related to this one, please click the labels below.
Posted by The Toy Box on June 18, 2019
Email ThisBlogThis!Share to TwitterShare to FacebookShare to Pinterest
Labels: 1980, 80's Album Review, 80's Music, 80's Music Review, He Said It, Music of the 80's, Retro Spins, The Police, Zenyatta Mondatta