Before I jump into today's post, make sure you check out all the updates from this weekend. I posted quite a few Order of Battle posts. Additionally, the side bar at the bottom of my Blog has been updated with a link to all of my Order of Battle posts. This is more so a quick reference for myself, but also a great way for visitors to quickly check out my own personal collection as well.

Marvel was always on the lookout for how to expand its popular X-Men series, and in 1982, this came in the for of the New Mutants. The group made their debut in Marvel Graphic Novel, a series of trade paperback produced in response to DC's DC Graphic Novel. Issue number four to be exact.

The group's origin followed five young mutants who are just starting to learn about their powers. Each one has their own trouble past, but with the aid of Charles Xavier, are given a path to follow.

With the popularity of the book, Marvel green lit a full volume series for the team, which debuted in March of 1981. The series would run for a well rounded out one hundred issues as well as seven annuals before evolving into Rob Leifield's popular X-Force.

This however wouldn't be the last of the team's comic days under the "Mutants" banner. A second volume was published July of 2003 and June of 2004, lasting for thirteen issues. Then again in July of 2019, a third volume would run for fifty issues through December of 2012.

In between it's comic series, Toy Biz delivered a set of four action figures - Well, three actually, as one was a variant of Magik. Each figure featured the quality one would expect at this point from a Toy Biz Marvel line, and as was the case of the era, was pretty cross compatible with other comic lines from the manufacturer. 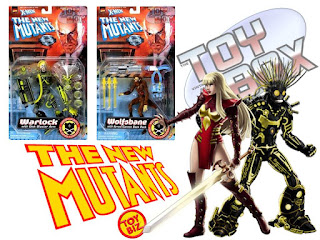 
Unfortunately for fans, the series never got rounded out with the remaining team members. It would have been great if Toy Biz would have finished what it started, and delivered Sunspot, Karma, Psyche and Cannonball. 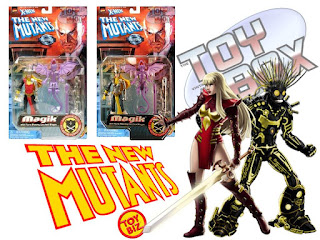 Toy Biz's The New Mutants line remains yet another one of the companies numerous "mini" lines which came and went during their desperate attempt to make anything and everything Marvel related. It will be interesting to see if popularity comes back full circle on this one as the New Mutants make more and more of an appearance via television and big screens.

Click "HERE" to go back to the home page. For more posts related to this one, please click the labels below.
Posted by The Toy Box on June 24, 2019
Email ThisBlogThis!Share to TwitterShare to FacebookShare to Pinterest
Labels: 1990's, New Mutants, The New Mutants, Toy Biz, X-Men