Would a show like The Flying Nun be accepted today? With how many different "groups" there are out there that seem to want to oppose everything, we can't help but feel like a reboot of this particular franchise would cause a ruckus somewhere.

That said, times were different back in the 60's. So when Sally Field first dawned her veil, and took to the air as The Flying Nun (1967 - 1970) the show became a massive success running for three seasons consisting of 82 episodes (including a one hour pilot).

Hasbro produced two very different iterations of the character in plastic form in 1967 - A 4.5 inch figure, and a 12 inch doll. 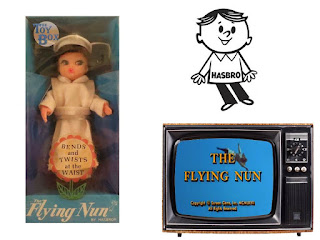 
These days the figure is much easier to find than the doll, and depending on whether or not you want the box is going to dictate heavily what you're going to be paying for it. Loose figures sell for $20.00 to $30.00, while a mint in the box figure can sell for as much as $200.00. 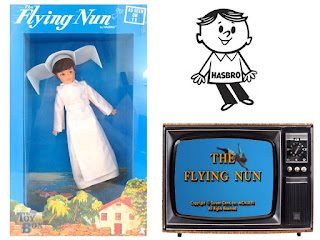 Oddly enough, while it's much rarer, the doll seems to go for much less. Mint in the box ones have sold for as little as $100.00. However, several sellers seem to ask between $300.00 and $500.00 for it - Which of course remain unsold. We have never seen one loose, so we unfortunately can't gauge a price for one out of the box.

If looking to purchase either version of these dolls mint in the box it is key to look for two major factors;


Click "HERE" to go back to the home page. For more posts related to this one, please click the labels below.
Posted by The Toy Box on May 30, 2016
Email ThisBlogThis!Share to TwitterShare to FacebookShare to Pinterest
Labels: 1960's, Hasbro, Sally Field, The Flying Nun