Lots of robots cropping up here at The Toy Box as of late. Not necessarily a bad thing - Unless of course you despise robots. 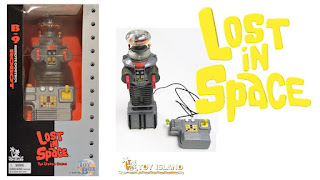 Lost in Space began its iconic climb to cult classic status in 1965 when the original black and white television series aired (shifting to color with season 2). Though it only lasted for three seasons, its impact on science fiction and pop culture in general has definitely left a lasting mark.

"Danger, Will Robinson, danger," definitely makes our top ten list of memorable quotes from a television series. It was the classic line by robot B-9, voiced by Dick Tufeld.

Much like Robby the Robot from Forbidden Planet, B-9 has had numerous toys produced depicting the character. Today we'll be looking at the remote controlled one shot version from Toy Island.

Much like the aforementioned Robby, B-9 was limited in how far it could walk because of the wire connecting the toy to the controller. As such, this is more so a tabletop toy, or one you're going to spend a lot of time on your knees with.

The ten inch toy featured a light up dome, and spouted the famous "Danger" quote. Though the controller featured numerous buttons, the majority of them are actually just molded plastic for aesthetics that do nothing.

Whats interesting to note is that in 1998 Trendmasters produced a B-9 robot for their own Lost in Space The Classic Series line. The artwork on the packaging is so similar to that of Toy Islands that it can often times be mistaken for the same series. We'll most likely be taking a look at that particular series in the near future.