Masters Of The Universe (Super 7)

Ever dream of incorporating your Masters of the Universe figures into your Star Wars or G.I. Joe lines? Well, now you can!

Super 7 brings these all new retro style He-Man figures to the scene in all their five point articulation glory. At the time of this writing, the figures were still available for pre-order directly from Super 7. However, a full month has passed, so we can't guarantee that they're still available. 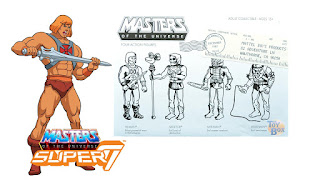 As with most new toy lines these days, the Masters of the Universe line, or rather, this specific Masters of the Universe line got its start at San Diego Comic Con in 2015. All four of what would become the first series of figures were released in a white "mailer" box, and featured a character specific weapon. Each figure was painted in a single color to represent a prototype feel.

This is where we have to interject with our own personal opinion - Hasn't the whole "fake" prototype in retro mailer box been done to death at this point? We just don't see the draw anymore to these types of releases. They've been done again and again to the point that there's really no appeal for us. While we waited patiently for the fully painted retail editions to come out, this particular pack really wasn't one we "had" to have for our collection. Granted, we get that there are some out there that feel the complete opposite, and that's cool. 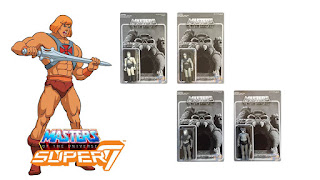 In addition, Super 7 also released a black and white figure set at New York Comic Con in 2015. Each card featured the same artwork on the front - Castle Grayskull - Also in black and white. 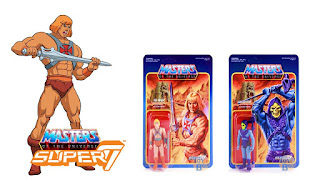 The fully painted retail releases look really fun. We were honestly one of those hold out people back when Funko was mass producing retro style figures, and we've been kicking ourselves ever since as we continue to play catch up. Rest assured we won't let these pass us by.

As we said above, the four figures released in the SDCC exclusive pack are the same four you will get at retail; He-Man, Skeletor, Mer-Man and Beast Man. Each figure comes packaged on a unique blister card which depicts full artwork by artist Jason Edmiston. His artwork alone is enough of an incentive to get us to buy. 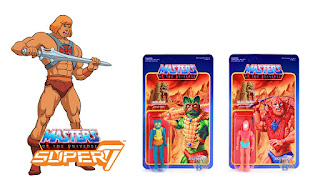 We'd be lying if we said we weren't concerned about the future of the line. While it's great that we get these four figures to start our collection, the real question lies in what will come next (if anything)? These retro based lines have a tendency to spring out of the starting gate, only to fumble the ball shortly thereafter, and fizzle out.

Just look at Funko's ReAction lines which have all been put on clearance at Toys R Us stores, with no sightings of new product hitting toy isles anytime soon. Even Funko seems to have given up on the concept as no new information about upcoming figures has surfaced - Not even at the recently held Toy Fair 2016. What we're basically getting at is that we're concerned that Super 7 may be a little late to the party to capitalize on such a line. We really do hope that we're wrong because we would love to see a fully fleshed out 3.75 line of Masters of the Universe toys. Time will tell if we do.

Click "HERE" to go back to the home page. For more posts related to this one, please click the labels below.
Posted by The Toy Box on May 26, 2016
Email ThisBlogThis!Share to TwitterShare to FacebookShare to Pinterest
Labels: 2010's, Funko, He-Man, Masters of the Universe, ReAction Figures, Super 7