Harold von Braunhut may not be a household name, but he's the father of many comic book novelty toys that are; X-Ray Specs,Crazy Crabs, Invisible Goldfish, and of course, The Amazing Live Sea Monkeys.

Sea Monkey's weren't an instant success when originally developed. Mind you, that wasn't because people weren't buying them, but rather because von Braunhut couldn't find anyone willing to sell them. It wasn't until he took out advertisements in major comic book titles of the era that orders would start rolling in. This lead to a profitable marketing plan that would span three decades of comic books.

Of course everyone knows at this point that Sea Monkeys are in fact not monkeys at all, but rather brine shrimp. Originally, the product was known as Instant Life. The name Sea Monkeys evolved when von Braunhut noticed that the shrimp inside had little tails which resembled those of monkeys. He's quoted as stating, "Those are cute little sea monkeys." From there it was just a trademark step away from the name that these iconic sea life have been selling as ever since. 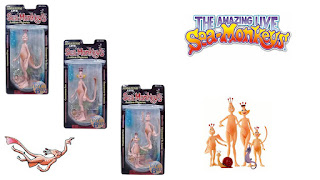 In 2005, Majestic Studios produced a line of figures based on the cartoon characters often times seen on the packages of Sea Monkeys. As far as we know, this is the first time a toy has ever been produced in such a fashion for the product.

The line is kept fairly basic. It features a mom, dad, and a brother and sister duo of kids. Much like the fish tank counterparts, the plastic versions were an instant success with collectors. They're so iconic, that it was just destined to be popular.

Prices are not buyer friendly these days. Each individual figure will cost you anywhere from $100.00 to $140.00 mint on the card. Do you know how many live Sea Monkeys you can buy for that price? Let's just sum it up by saying, "A lot."

Click "HERE" to go back to the home page. For more posts related to this one, please click the labels below.
Posted by The Toy Box on May 02, 2016
Email ThisBlogThis!Share to TwitterShare to FacebookShare to Pinterest
Labels: 2000's, Brine Shrimp, Sea Monkeys, The Amazing Live Sea Monkeys