Oh boy, folks. Buckle in. This one may be a bumpy ride.

Dubbed the worst show on television, and being noted by critics as having no redeeming qualities, Jerry Springer has been appealing to what some call the lowest denominator of human beings since September of 1991. His show often times features guests so far detached from basic human morals and concepts that it's laughable, yet sad at the same time. In short, the show is such a train wreck - You don't want to watch, but you can't look away. 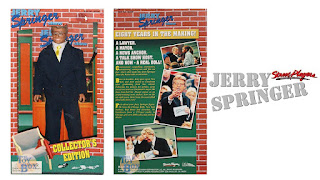 Street Players was trying desperately to find a foothold in the market of 12 inch dolls in the 1990's. The problem however was that they were consistently producing items that nobody particularly wanted. Dolls based on The Nanny, Dennis Rodman and others just weren't hitting the mark with collectors. Sadly for Springer, nor did this particular doll - Though we're sure he made a great gag gift for many folks when someone was going through a rocky relationship.

This doll is honestly one of those so bad it's good things - You know, kind of like his show. It feels sleazy and slimy just to look at. You seriously would be hard pressed to find a doll that oozed with such sordid appeal. Unless of course you looked at..... 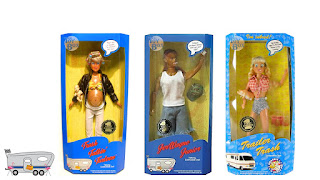 What better dolls could you find to surround your Jerry Springer doll than those of the 1999 Arsenic & Apple Pie Trailer Park Trash? They seem so perfectly matched.

With the likes of Trash Talkin' Turlen, JerWayne Junior and Little Miss Guzzler, this line seems to be the ultimate parody of Barbie. Each doll features a talking feature with such notable quotations as, "My daddy says I'm the best kisser in the county." Yikes! Each package also contains a gold and black sticker which verifies that the doll is a first edition - Which honestly we'd be surprised if it were popular enough to deem a second edition.

Click "HERE" to go back to the home page. For more posts related to this one, please click the labels below.
Posted by The Toy Box on May 19, 2016
Email ThisBlogThis!Share to TwitterShare to FacebookShare to Pinterest
Labels: 1990's, Arsenic & Apple Pie, Gibby Novelties LLC, Jerry Springer, Street Players, Trailer Park Trash