The Howler, The Vampire, The Zombie (AKA The Monsters) (Toy Island)

The Howler, The Vampire, The Zombie (AKA The Monsters)
Toy Island
1992

There's something to be said about a classic creature toy line. We've covered a few of them here and there - Our most popular being the Remco Universal Studios brand. Obviously some are far more popular than others, but that doesn't necessarily mean that the lesser favorable ones are bad. Toy Island is no stranger to the world of monster related toys. The company has produced four different lines since opening its doors in 1989 (and sadly closing them in 2007). Today we're going to take a look at their 1992 line which fans have come to call "The Monsters".

No, you won't find the word "The Monsters" anywhere on the front of the package. Instead, you need to flip it over where the cardback showcases the three characters available in the line - The Howler, The Vampire and The Zombie. 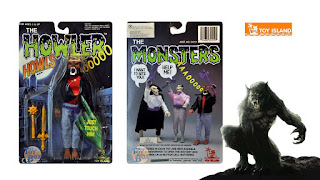 Each eight inch doll is in the fashion of your classics Mego line, and could easily be incorporated into a set of them. Featuring full cloth clothing, and decent articulation, there's definitely a quality of the same standards as your traditional Mego doll. 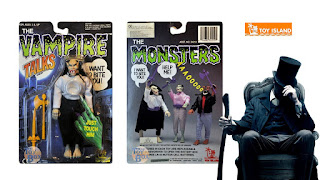 Admittedly, we don't really know what's going on with the accessories packed in with each character. Axes, swords and maces? These seem more like weapons that someone would futility try and use against creatures such as these as opposed to them using them themselves. 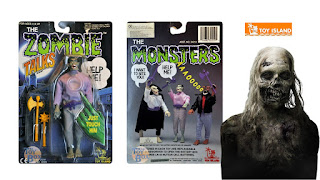 Okay, so they're not the greatest in terms of monster figures we've seen come and go in our lifetime, but there's still some charm to them. Whether it was due to lackluster sales, or low quantity production, these figures aren't too readily available on secondary markets. In fact, we've honestly only seen them a handful of times, and typically they're loose, and missing articles of their clothing. As such, while we typically would gauge a price for them, we're unfortunately not able to. If you've purchased one in the past or recently, drop us a comment on what you paid.

Click "HERE" to go back to the home page. For more posts related to this one, please click the labels below.
Posted by The Toy Box on May 05, 2016
Email ThisBlogThis!Share to TwitterShare to FacebookShare to Pinterest
Labels: 1990's, Monsters, The Howler, The Vampire, The Zombie, Toy Island