Whether you like Adam Sandler or not, there's no denying that the comedian had his hay day with hit after hit; Billy Madison, Happy Gilmore, The Wedding Singer, and all those other films that have become cult classics now helped to pave the way for the man as a household name. Unfortunately for Sandler, as it often times goes in Hollywood, his career slowly seemed to diminish. One of his recent films, Pixel was deemed so bad that critics were calling it the last nail in the coffin of his already heavily dwindled career (again at the time).

Since then, Sandler has signed a contract to provide four Netflix direct films. His first film, The Ridiculous 6 was just that - Ridiculous - As in ridiculously boring, crude and obnoxious. As of this writing, it has a zero percent on Rotten Tomatoes. Critics and general audiences can't stand the film.

One of the films churned out during his downward spiral in Hollywood was Little Nicky. It's honestly probably one of the last films we saw him in - Prior to our attempt to sit through The Ridiculous 6. Truth be told, we remember about as much about the film Little Nicky as we do about what happened the day before we were born - I.E. Nothing whatsoever.

Around this time, McFarlane Toys, as popular as they were for their Spawn figures, were throwing everything they could at the wall, and hoping something would stick. Toys based on the film were one of those particular items that thudded against the wall, then slid down it - Or rather, bounced off in a ricochet that sent it flying back at McFarlane's head.

Much like the film, very few seemed interested in toys based on the characters. After producing just four figures, McFarlane Toys quickly moved on in their search to find something else to produce. 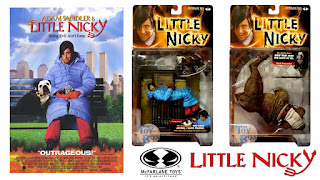 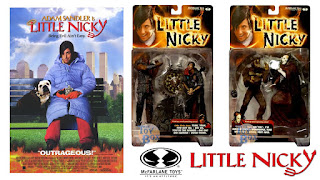 Cassius and Little Nicky*Gate Keeper and Gary the Monster

Mr. Beefy was also produced and released in a baggie. Believe it or not, one of the last sales we saw for this was a box of seventy-five of them for $35.00. Nobody bought them. 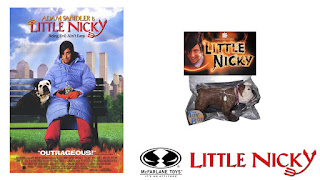 For those who want to hunt down the Little Nicky figures, you can easily obtain a full set on the card for about ten bucks.

Click "HERE" to go back to the home page. For more posts related to this one, please click the labels below.
Posted by The Toy Box on May 09, 2016
Email ThisBlogThis!Share to TwitterShare to FacebookShare to Pinterest
Labels: 2000, Adam Sandler, Little Nicky, McFarlane Toys