Terminator 2 3D - Battle Across Time was the Terminator movie fans wanted, but never got to see on the big screen per se. It featured the cast of the original Terminator 2 Judgement Day; Arnold Schwarzenegger, Linda Hamilton, Edward Furlong and Robert Patrick, all reprising their respective rolls, and was written / directed by James Cameron. The "film" was actually part of the attraction of the same name at Universal Studios.

The "ride" opened in 1996 in Universal Studios Florida, and from there expanded to the Hollywood location in 1999, and finally to Japan in 2001. The ride would close down in 2012 - With a recently announced 2016 re-release planned.

It was based on this attraction that Kenner produced the short lived action figure line of the same name. It featured six action figures, and an additional large size action figure / doll. 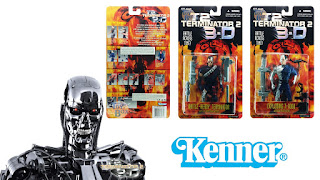 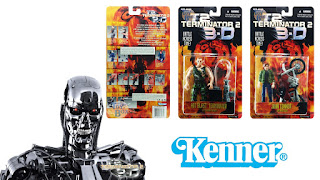 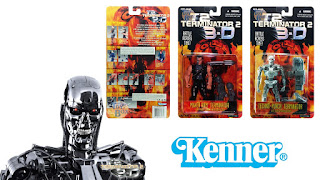 The line would become Kenner's last Terminator series to date, and the third in total that it produced. Because it followed in the same design and style of the original Kenner Terminator 2 (1992) and Terminator 2 Future War (1993) lines, these easily incorporate into those series as somewhat of a continuation to them. As reader Barbecue17 points out, most of these are actually repaints of the aforementioned series. 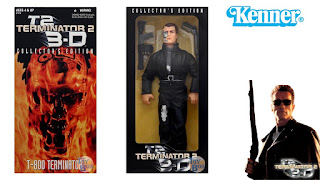 The figures aren't too common these days, and unfortunately the majority of sellers that have them are asking way more than people seem interested in paying. The average asking price is anywhere from $30.00 to $40.00 each. As a result, there are not too many transactions taking place for them.

Click "HERE" to go back to the home page. For more posts related to this one, please click the labels below.
Posted by The Toy Box on May 23, 2016
Email ThisBlogThis!Share to TwitterShare to FacebookShare to Pinterest
Labels: 1990's, Battle Across Time, Judgement Day, Kenner, T2, T2 3D, Terminator 2, Terminator 2 3D, The Terminator, Universal City Studios, Universal Studios