McFarlane Toys churns out a lot of odd, and a lot of fantastic products. One that fits both those bills is the 2007 Twisted Christmas line.

Many fans / collectors consider the line to be the fifth wave from the McFarlane Monsters line which ran from 1997 to 2005. Considering the Twisted Christmas line was released in 2007, that's not an unreasonable deduction. However, this theory has never been confirmed.

Regardless, that aspect doesn't impede this line from being awesome to collect. Just think how these would look on your fireplace mantle at Christmas time, or even hung around the tree as ornaments. They'd be the ultimate odd conversation piece for friends and families around the holidays. 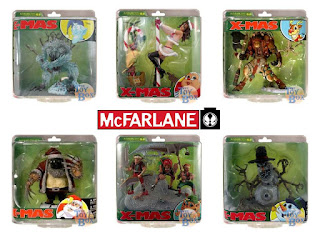 
Six basic figures were produce (as shown above), with an additional limited edition variant of Mrs. Claus. The basic series version sported brown hair, while the limited edition - Which was limited to just 4,000 pieces - had flowing locks of blonde hair. 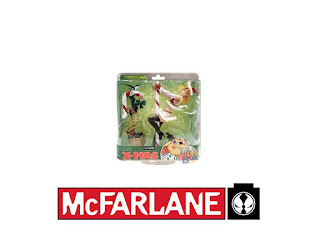 Click "HERE" to go back to the home page. For more posts related to this one, please click the labels below.
Posted by The Toy Box on June 02, 2016
Email ThisBlogThis!Share to TwitterShare to FacebookShare to Pinterest
Labels: 2000's, McFarlane Toys, Monsters, Twisted Christmas