Sleepy Hollow which hit theaters in 1999 was met with average critical reviews which called the movie pretty, and praised Depp for his ability to disappear into the role of any character (Roger Ebert). Tim Burton certainly has a flair for the odd which translates well into his movies.

McFarlane Toys followed the release of the film with a very small series of figures. Three figures to be exact with two variant packages. The series included The Crone, Ichabod Crane with both an opened and closed bag, and The Headless Horseman, one with a skull head and one with Christopher Walken's head. It's key to note that if you're opening these items than these variants mean nothing as the bag packaged with Ichabod can be opened or closed no matter which version you buy, and The Headless Horseman comes with both heads that are interchangeable. In short, these variants will only be important to mint in package collectors. 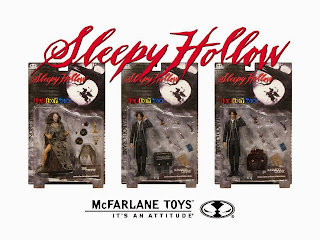 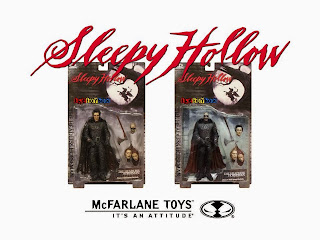 A unique item to the series was the deluxe The Headless Horseman which also came with his horse. The packaging itself was fantastic with the window box being given the impression of fog rolling through it. 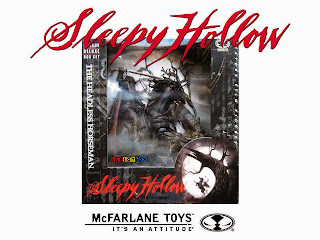 These days you can hardly give the toys away let alone sell them. We've seen a ton of full sets of the carded figures priced at about fifteen dollars, and they don't get so much as a single bid. The only piece that does seem to sell is the deluxe boxed set which we've seen go for as much as $70.00.

Join us next time when we take a look at Pirates of the Caribbean - Dead Man's Chest!

Click "HERE" to go back to the home page. For more posts related to this one, please click the labels below.
Posted by The Toy Box on March 17, 2014
Email ThisBlogThis!Share to TwitterShare to FacebookShare to Pinterest
Labels: 1990's, Johnny Depp, McFarlane Toys, Sleepy Hollow, Tim Burton