Pirates of the Caribbean - At World's End (NECA)

Pirates of the Caribbean - At World's End
NECA
2007

What was then known to be the final chapter of a trilogy, At World's End wrapped up the story arc of Bootstrap Bill and his son Legol....Er...Will Turner. With over the top action scenes and CGI amassing the screen, confusion was certainly a big part of the film - for us anyway.

2007 marked the last line of Pirates of the Caribbean figures to date for NECA, and they sent the series off with kind of a "ho-hum". Yes, we did finally get Ragetti and Pintel figures, but the rest of the series seemed uninspired, to the point of almost being boring.

Eight figures hit store shelves in 2007, and were quickly moved to clearance isles over the course of the next few months. 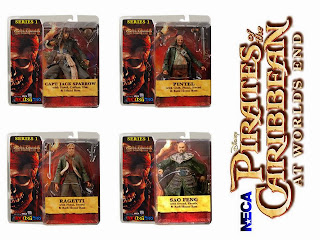 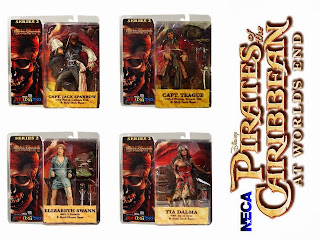 Join us next time when we take a look at Police Academy!

Click "HERE" to go back to the home page. For more posts related to this one, please click the labels below.
Posted by The Toy Box on March 24, 2014
Email ThisBlogThis!Share to TwitterShare to FacebookShare to Pinterest
Labels: 2000's, At World's End, Disney, Johnny Depp, NECA, Pirates of the Caribbean