Personally, we love the franchise. Sure, it's had its dud moments, but parts one through five are still very watchable for us. Six and Mission to Moscow - Not so much.

Between Police Academy 5: Assignment Miami Beach (1988) and Police Academy 6: City Under Siege (1989) came the cult classic animated series. Spanning two seasons and sixty-five episodes, the series would technically fall into place between the fourth and fifth films as the character Carey Mahoney is the main presence, and "leader" of the cops.

To coincide with the show, Kenner produced several action figures based on the cartoon versions of the characters. Each one came packed with zany accessories which made for very unique features of play. While some of the characters did come packed with guns or bladed weapons, for the most part, much like the animated series, the figures took a non lethal approach to fighting crime with weapons such as Tackleberry's Fistzooka. 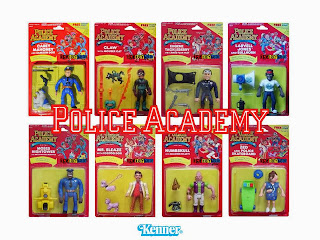 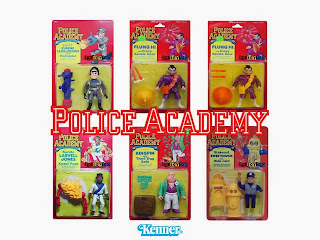 Many people consider the Stakeout Sweetchuck with Hide-Rant to be a part of the Special Assignment Rookie subseries, however unlike those figures, his does not contain the banner for the series.
﻿ 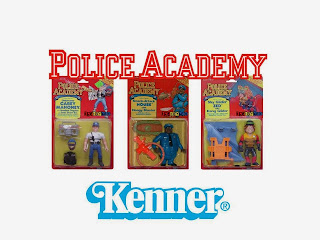 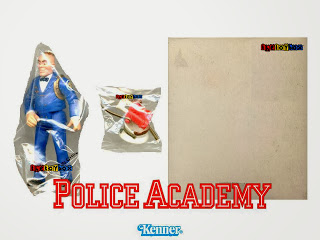 Several vehicles were planned for the series, but due to poor sales only two were actually produced.  The remaining planned vehicles were; 4-Wheel Basher, Bruiser Cruiser, Crime Mulcher and Jailhouse Jalopy.﻿ 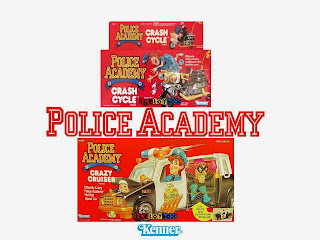 There were two playsets planned for the series, the one produced below, and the smaller Copper Corner which was only released in Argentina by the company Josca.﻿ 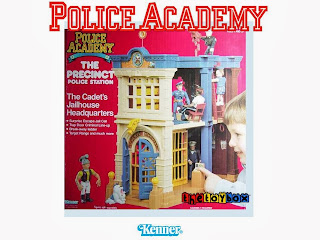 Click "HERE" to go back to the home page. For more posts related to this one, please click the labels below.
Posted by The Toy Box on March 27, 2014
Email ThisBlogThis!Share to TwitterShare to FacebookShare to Pinterest
Labels: 1980's, 1990's, Kenner, Police Academy