The show, Welcome Back, Kotter, technically starred Gabe Kaplan, but is more known for helping launch the career of John Travolta.  The series ran from 1975 to 1979 for four seasons, and focused on Kaplan's character Gabe Kotter who returns to his high school alma mater as a teacher.  Predominantly featured were his students the Sweethogs - Vincent "Vinnie" Barbarino (John Travolta), Arnold Horshack (Rob Palillo) and Freddie "Boom Boom" Percy Washington (Lawrence Hilton-Jacobs).

In 1977, Travolta made a big splash on the big screen with Saturday Night Fever.  With his sudden boost in popularity, the actor started focusing his sights on feature films, and officially left the series after season three, making only guest appearances in season four.  In 1979, Travolta starred along Olivia Newton-John in the film Grease, and from there only skyrocketed further in popularity.

When the show ended, Kaplan went on to star in a new series, Lewis & Clark, while other characters were considered for spin off series which quickly dissolved into nothing.  The actors, including Travolta have also reprised their roles from the series as of the late 1990's in a variety of shows.  The most popular of course was Travolta appearing on Saturday Night Live in a sketch that showcased what the show would have been like if directed by Quinten Tarantino.

Throughout the series, merchandise became a big part of marketing.  Among this was the 1976 Mattel series of nine inch action figures.  Each figure featured a fair amount of articulation, and show accurate cloth clothing.  In addition to the figures were a motorcycle and classroom playset.  To date, the motorcycle is the most difficult item to track down in the series. 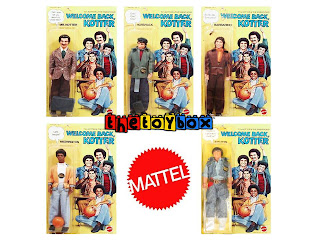 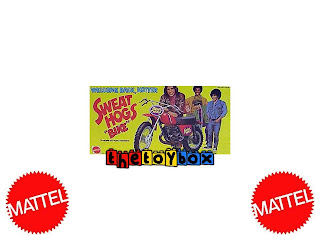 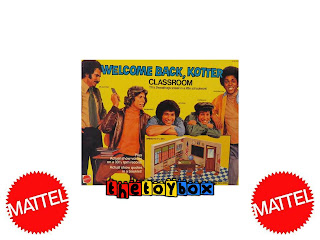 Join us next time when we take a look at Mystery Men!

Click "HERE" to go back to the home page. For more posts related to this one, please click the labels below.
Posted by The Toy Box on January 23, 2014
Email ThisBlogThis!Share to TwitterShare to FacebookShare to Pinterest
Labels: 1970's, Mattel, Welcome Back Kotter