In 2000, Mattel did the ultimate re-release of a classic franchise when they produced the very limited Masters of the Universe Commemorative Series.  This series was produced strictly for the fans with pieces limited to as little as 1,000, and at the most, 15,000.  Right off the bat it fetched a premium on secondary markets, with the limited "Legends of Eternia" set selling for as much as $1,500.00, and individual figures selling for upwards of $200.00 a piece.

Produced using the exact same molds and color schemes of the originals, the series' intentions was to give fans an opportunity to get these iconic figures from their past at a reasonable price - Yet supply never really met demand, and today some of them sell for more than the originals.

Each figure came packaged on its original card from the 80's, but then was also sealed inside of a black metallic window box.  To say it's some beautiful packaging is an understatement.

In total there were two series of figures.  Series one contained ten figures, and series two contained only six.  We're not sure why a third series and beyond was never produced as their was clearly a demand for the figures. 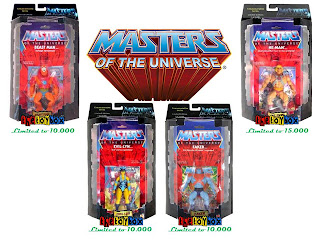 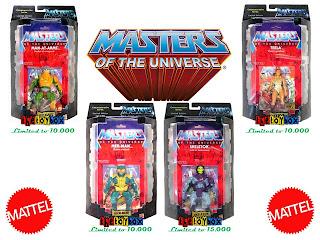 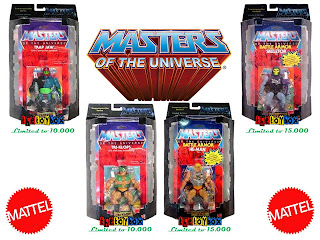 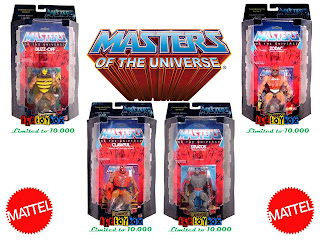 SERIES TWO
Buzz-Off*Clawful
Stratos*Zodac
In addition to the figures, Mattel produced the classic Battle Cat and Panthor.  Each animal came with its respective counterpart. 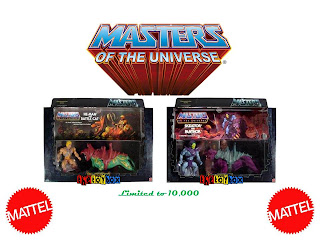 BEAST AND RIDER
He-Man and Battle Cat*Skealtor and Panthor
Two five packs were also produced.  What made these a necessity to collectors was that each pack contained an exclusive figure that was not available on a single card.  Pack one contained Prince Adam, and pack two contained Moss Man. 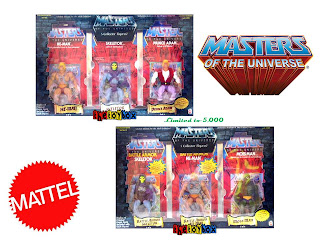 FIVE PACKS
Pack 1 - He-Man*Skeletor*Prince Adam*Man-At-Arms and Beast Man
Pack 2 - Battle Armor Skelator*Battle Armor He-Man*Moss Man*Zodac and Clawful
The grand daddy of this series was the Legends of Eternia pack.  This massive case contained ten figures, and was limited to just 1,000 pieces.  While the packaging was amazing, the figures were nothing more than those released in the first series of the Commemorative line - Though still a "Must Have" for any die-hard Masters of the Universe collector. 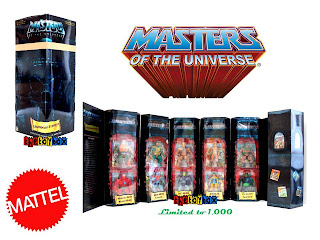 
Join us next time when we take a look at The Beatles: Yellow Submarine!

Click "HERE" to go back to the home page. For more posts related to this one, please click the labels below.
Posted by The Toy Box on January 02, 2014
Email ThisBlogThis!Share to TwitterShare to FacebookShare to Pinterest
Labels: 2000's, Commemorative Series, He-Man, Masters of the Universe, Mattel