Ah, The Beatles.  One of the worlds most influential bands, and leaders of the "British Invasion" of the US in the 1960's.  "1, 2, 3, 4..." were the first lines spoken on The Beatles debut album Please Please Me, and with it history was made.  From 1963 to 1970, The Beatles topped the charts of numerous countries bringing with them a new wave of rock and roll music, love, joy, controversy, and Beatlemania.  They were John Lennon, Paul McCartney, George Harrison and Ringo Starr - The Fab Four, and for over a decade they dominated the rock and roll scene, bringing drastic change and evolution to the genre.

When the band broke up in 1970 with their final album, "Let It Be", the world of music was turned upside down.  Many fans didn't know what to do with themselves.  They couldn't believe that such a group of amazing artists could go their separate ways.  Several facets came under fire for the break up of The Beatles, but none more than Tokyo born Yoko Ono.

Its impossible to say if The Beatles would have ever reformed.  They sadly never got the chance to.  John Lennon was fatally shot outside of his home, The Dakota, on December 8, 1980 by Mark David Chapman.  His former band mate, George Harrison, passed away on November 29, 2001 from lung cancer.  All during this time Paul McCartney has enjoyed the spoils of a successful solo career as well as a career with his new band, Wings.  Meanwhile Ringo Starr enjoyed a subtle solo career, and is in fact credited with having the first hit post the band's breakup with "It Don't Come Easy."

All throughout the past five decades The Beatles have also been immortalized in numerous collectibles.  Books, posters, plates, statues, toys and more.  We speculate they will continue to be honored in such a manner long after the remaining members, and many of us are long gone.

McFarlane Toys was one of the many companies to give a nod of appreciation to The Beatles with the 1999-2004 series of figures based on the animated film "Yellow Submarine".  Two series of figures and a re-release of the first series encompass the collection.

What's unique to series one is that Paul McCartney was released with a variant.  To date the version with Old Fred is the most difficult and expensive to obtain. 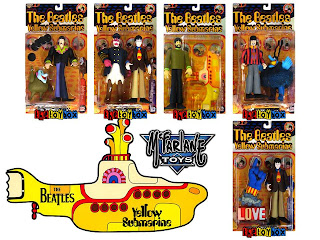 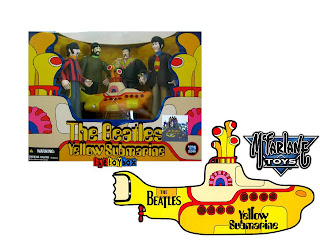 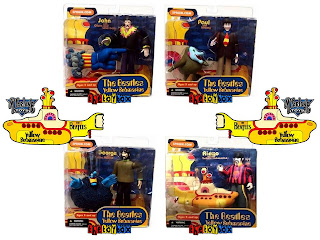 RE-RELEASE (2004)
John Lennon with Blue Glove and "Love" Base*Paul McCartney with Jeremy*George Harrison with Blue Meanie*Ringo Starr with Yellow Submarine
﻿
Join us next time when we take a look at Battlestar Galactica!

Click "HERE" to go back to the home page. For more posts related to this one, please click the labels below.
Posted by The Toy Box on January 06, 2014
Email ThisBlogThis!Share to TwitterShare to FacebookShare to Pinterest
Labels: 1990's, 2000's, George Harrison, John Lennon, McFarlane Toys, Paul McCartney, Ringo Starr, The Beatles, Yellow Submarine