When i0, or Image 10th Anniversary started hitting store shelves in 2002 we got excited.  We hyped ourselves up for a series of figures that could have served to encompass the many great characters artists/creators such as Jim Lee, Todd McFarlane, Sam Keith and all the other Image alumni brought with them to the company.  Figures based on WildC.A.T.S., The Maxx, Wetworks and more would have made for one amazing series.

Sadly, as quick as the series came, it also ended with just four figures being produced.  Not much of a tenth anniversary if you ask us.  Despite this disappointingly small series, the figures produced didn't fail to impress.  The sculpts, articulation, and overall design are amazing, and represent each character perfectly.  At this point it's save to say we're not going to see any 20th anniversary figures, but maybe something is on the horizon for the 30th anniversary - Though that's a bit of a ways away in years. 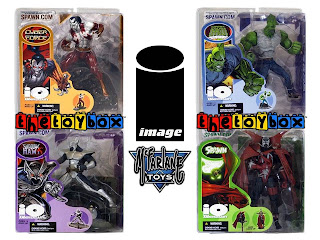 Join us next time when we take a look at Toys Family Guy Crazy Interactive World!

Click "HERE" to go back to the home page. For more posts related to this one, please click the labels below.
Posted by The Toy Box on January 30, 2014
Email ThisBlogThis!Share to TwitterShare to FacebookShare to Pinterest
Labels: 2000's, Image 10th Anniversary, Image Comics, io Anniversary, McFarlane Toys