Mystery Men is one of those movies that sadly many people missed out on.  Despite its strong cast, the film failed to draw people to theater seats, and as a result the 68 million dollar film only brought in 33 million dollars when all was said and done, making it a huge commercial flop.

The film stars the likes of Hank Azaria, Ben Stiller, Janeane Garofalo, Eddie Izzard, Greg Kinnear, William H. Macy, Kel Mitchel, Paul Reubens and Geoffrey Rush, and is based along the premise of everyday ordinary people who use their "special" talents to become superheroes in a city plagued with crime.  We highly recommend you check it out if this was a film you passed on.  It's fun, it's got action, comedy, and a great story.

In 1999 Playing Mantis hoped to back the film by producing a series of action figures based on the film.  It unfortunately didn't pay off for them when the film flopped, and as a result sales of toys suffered as well.  While the series encompassed the majority of the "good guys", it sadly didn't include any villains, to and include the main protagonist of the film, Casanova Frankenstein. 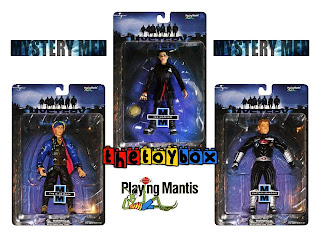 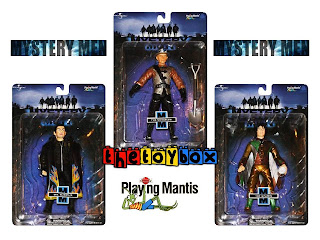 It's a shame that neither the movie or toys took off as well as those backing them hoped.  We personally think that the movie was great, and still enjoy it to this day.  The figures serve to remind us of how great the characters in the film were, and thought they don't have any villains to fight in plastic form, are still awesome figures.

Join us next time when we take a look at i0 Anniversary (AKA Image 10th Anniversary)!

Click "HERE" to go back to the home page. For more posts related to this one, please click the labels below.
Posted by The Toy Box on January 27, 2014
Email ThisBlogThis!Share to TwitterShare to FacebookShare to Pinterest
Labels: 1990's, Mystery Men, Playing Mantis