I think we're one of the few people who actually liked the movie Wild Wild West. Admittedly we never saw the original television show, so the sudden change of direction the film went from the show wasn't even a thought in our minds. In fact, I don't think we even knew it was a series until after we saw the movie.

Will Smith and Kevin Kline play off each other so well in the movie, and quite frankly it's just fun to watch. It has a healthy dose of action, a good bit of comedy, and characters which are likable. What's not to like about that?

X-Toys had a very short live shelf life from 1999 to 2000 having only produced four toy lines until closing shop. One said line was a small series based on the film Wild Wild West.

The company gets points for trying. The figures aren't terrible, in fact they're quite on par with the likes of your average Toy Biz Marvel line of this particular era. They have descent sculpts, descent paint jobs, and descent articulation - Not to mention a some great accessories. 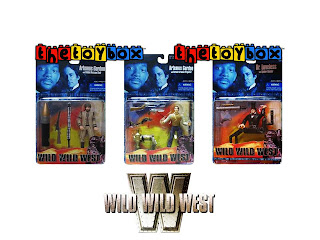 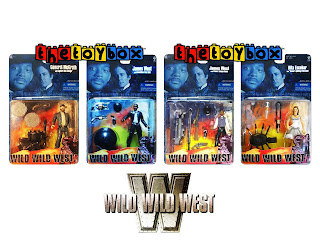 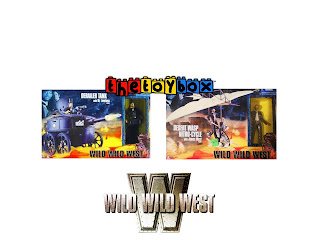 We suspect the lackluster sale of figures can be attributed to the lackluster reception of the film which received mostly negative reviews. We suspect Will Smith may be kicking himself for passing on the role of Neo in The Matrix for James West in this film - But, let's be honest, first film aside, the sequels for The Matrix didn't fair to well either. Either film seems like it would have been a bad choice in hindsight.

Join us next time when we take a look at WWF - World Wrestling Federation!

Click "HERE" to go back to the home page. For more posts related to this one, please click the labels below.
Posted by The Toy Box on September 30, 2013
Email ThisBlogThis!Share to TwitterShare to FacebookShare to Pinterest
Labels: 1990's, Kevin Kline, Wild Wild West, Will Smith, X-Toys