Over The Top (LewCo)

Question: What do you do when you have a movie about arm wrestling staring one of the hottest action stars of the 80's?

Answer: Make action figures designed to arm wrestle based on said action star of the 80's!

Cannon films gets a bum wrap in the movie industry. They're "credited" with making some of the most overpriced, under delivering films in the industry, as well as causing the boom which would be celebrity paychecks. In the documentary, Electric Boogaloo: The Wild, Untold Story of Cannon Films (which we highly recommend movie fans watch - On Netflix now), Robert Foster tells an excellent story of how he told the head of Cannon films his client would not work for him for ten million dollars. To which the response he got was, "How about twelve?" This was during a time when at a most Stallone had probably only been paid four or five million for his roles. When other actors started hearing about this, they too started asking for the large payouts to perform in movies.

If that weren't bad enough for the group, Cannon was also the group behind Superman IV: The Quest for Peace, and though we love it, and are in the minority, Masters of the Universe. They were also the driving force behind the numerous Chuck Norris and Jean Caude Van Damme films which were churned out in droves during this era.

We digress though (but seriously, check out the documentary).

Over the Top wasn't deemed to be a "bad" film, it just got a wrap of being another routine movie in the world of film making. It's also been stated as nothing more than a feature film product placement ad, and a 90 minute rock video due to all the hard rock songs showcased throughout it.

LewCo stepped in to produce action figures of the film, and sadly never did anything beyond this. The company folded almost immediately under the lackluster reception of the film which equated to poor sales of toys.

The irony of this is that carded figures will set you back over a hundred dollars a piece these days, with loose ones setting you back anywhere from $20.00 to $60.00 a piece. Where was this kind of demand when the toys were being shuffled off to clearance bins? 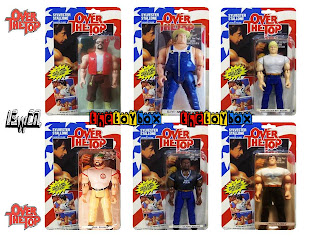 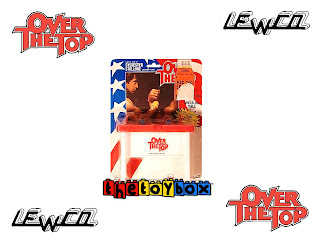 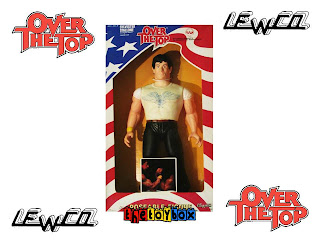 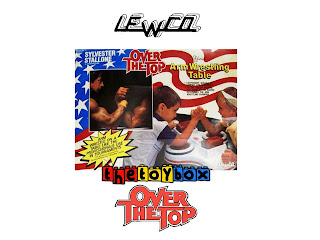 Join us next time when we take a look at Video Game Super Stars - Mario Kart 64!


Click "HERE" to go back to the home page. For more posts related to this one, please click the labels below.
Posted by The Toy Box on September 23, 2013
Email ThisBlogThis!Share to TwitterShare to FacebookShare to Pinterest
Labels: 1980's, LewCo, Over The Top, Sylvester Stallone