We thinks it's safe to say that the rate in which the series five Teenage Mutant Ninja Turtles stuff hit store shelves pretty much surprised everyone who collects the series.  It was just July of this year when series 4 hit store shelves, just about a week ago that the second series of Mutagen Ooze hit store shelves, and in between all of that were a ton of vehicles (which we'll cover in this post).  Playmates Toys is in full swing of for the line with no sign of it slowing down any time soon. 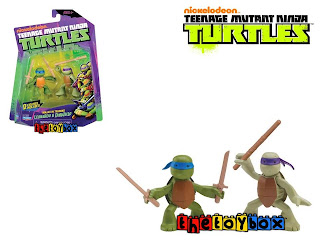 The first item in the new series that we personally saw was the Ninjas in Training two pack featuring very young versions of Leonardo and Donatello.  We absolutely love this set, and have been anticipating the mini ninjas since we first saw them at Playmates Toys reveal early this year.

Each figure stands approximately two inches high, and comes with their classic weapons of choice with a twist - They're designed to look like wooden training weapons.

Each figure features a swiveling head, and can also swivel at the waist - Though admittedly, this looks really weird when done because the shell splits as well.  We suppose this was put in strictly for the articulation police - You know, the collector that can't justify buying a figure if it doesn't have an outrageous amount of articulation.  The arms are on ball joints which allow for up and down, and a little side to side motion in them.  Unfortunately the legs have no articulation, so the pose that they're sculpted in are the only way you're going to get them to stand.  Still, the stance for each figure is pretty cool, and works well for displaying. 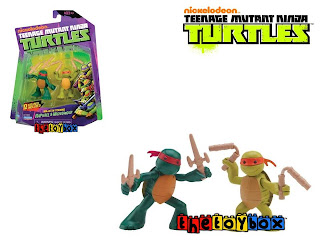 The Raphael and Michelangelo Ninjas in Training feature the same articulation, and weapon style, and round out the "collection" of mini turtles nicely. 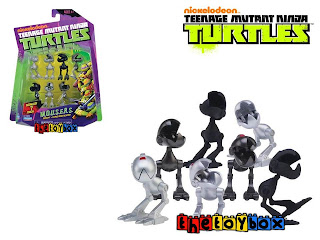 The M.O.U.S.E.R.S. seven pack is destined to be a fan favorite, and one that many people will be buying in abundance for "army building."  Playmates was incredibly generous when putting this package together not only when it came to the sheer quantity you receive for the price, but also in the detail.

Each Package features two black, two dark grey, and three silver M.O.U.S.E.R.S. figures, each with 360 degree rotating legs, a ball jointed neck and a mouth that opens and closes.  The detail inside the mouth is impressive with little pink wavy lines inside depicting the power source flowing through them.
The package displays the "figures" in walking and standing poses, but sadly you're only going to get a standing pose out of them when displaying them.  They're simply too top heavy to pose any other way.
Other figures have been announced to date such as Spider Bytze, Shredder #2, and Battle Shell Turtle figures which coincide with the 4 inch line, but to date these figures haven't been found on store shelves.  We're not sure if these are slatted for 2014, and will encompass series six, or if there's still more to see from series five (figure wise).  We suppose it's also possible that series six could hit store shelves this year at this rate.  We'll certainly keep you posted.
Because a whole bunch of vehicles came out in between the series four and five figures, we're not sure if these belong to the 4th or 5th, but since we didn't cover them in our series four review, we'll cover them here. 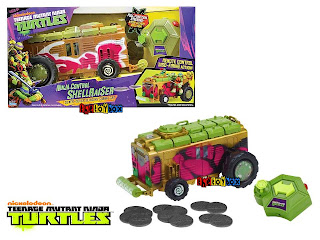 When the Shellraiser was released with the initial series one figures we were majorly disappointed with it.  It was nothing more than a hollow hull which served as nothing more than a carrying case - Which clearly wasn't the vehicle's produced intention.  We were expecting seats inside, consoles, even a simple steering wheel would have sufficed - But instead there was nothing.

When it was announced that Playmates would be producing a new Ninja Controlled Shellraiser we hoped that the vehicle would be redeemed - Especially with the higher price tag.  Sadly, it wasn't, and this new version of the Shellraiser is nothing more than a cash grab by Playmates Toys.
Sure, it now features a radio controlled function, and fires out up to ten manhole cover discs, but that's it.  You can't even access the inside of the hull to put figures inside, and all and all this vehicle compliments the series about as much as Carrera's Slot Car Race Set.  Unless you're a completest, or absolutely love remote control cars, this is definitely an item you can pass on - Especially if you already have the original Shellraiser.  The $49.99 price point certainly doesn't help either. 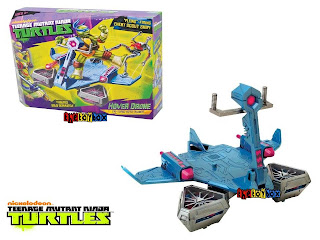 The Hover Drone vehicle coincides with the smaller class vehicles of the series, ranging at around $9.99.  We love this thing!  We really like the Kraang based color theme here - light blues with bright pink inner workings.  We more so really like the fact that it works great for actually standing up your Kraang figures with the foot peg and handlebars.

But, don't just get this thing for helping your figures stand, it really is a pretty neat little thing.  It has wheels on the bottom that when you move them forwards or backwards, the hover engines (fan blades) spin inside - And you can really get these things moving if you spin the heck out of the wheels.  It also has two pink missiles that can be flicked out of the barrel located on each wing.

This vehicle is proof positive that a toy doesn't need to be overly fancied up with accessories or gimmicks, nor expensive to be cool  For ten bucks, we're sure kids young and old will get their money's worth out of this thing. 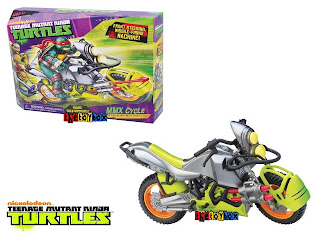 The second smaller class vehicle is one we almost completely missed.  Why?  Because it looks to similar to the series one Rippin' Rider when on store shelves.  The MMX Cycle is slightly larger and bulkier than the aforementioned Rippin' Rider, but all and all it really gives the impression of, "Oh, look.  Another motorcycle for the new TMNT line."  It really doesn't feel necessary.

Much like the Rippin' Rider, it features two missiles that can be flicked from the same sculpted launcher of the previous motorcycle, and features a kickstand for standing the bike up.  Beyond that though - It's just another motorcycle in what is quickly becoming a heavily motorcycle populated line - Though we can't deny that aesthetically it's very pleasing to look at. 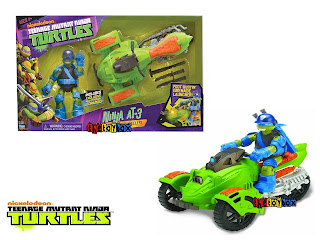 The last vehicle produced is the medium sized Ninja AT3 which features an exclusive All-Terrain Leonardo figure.  The figure alone is worth the purchase in our book, and really the main selling point for us.  We love the cap on his head, and the newly sculpted swords for the figure.

The three wheeled ride features a small spring loaded missile on the front - A rarity for the line as the majority of the vehicles seem to be geared towards flicking the projectiles out from the rear.  Though beyond that, and the three spinning wheels you won't find any other features.
It's a little heavier than most of the mid sized vehicles in the series, and it also doesn't feature many thin plastic pieces, so it may be a little more sturdier for those out there who have children who are tough on their toys.  Though, we suppose that just like any other toy out there, with persistence it would break.
That about does it for our look at the series five figures, and either the series four or five vehicles in the hot, hot, hot, Nickelodeon's Teenage Mutant Ninja Turtles line.  This line is one of our absolute favorites on the market today, and we really hope that Playmates Toys can keep up the momentum, excitement, and sheer volume of toys.  We already have our mental checklist in full swing of toys we'd love to see from this line just based on the first season of the show.

Click "HERE" to go back to the home page. For more posts related to this one, please click the labels below.
Posted by The Toy Box on September 15, 2013
Email ThisBlogThis!Share to TwitterShare to FacebookShare to Pinterest
Labels: 2010's, Nickelodeon, Playmates Toys, Teenage Mutant Ninja Turtles, TMNT