If we really have to sit here an explain the premise of Popeye the Sailor to you, then we really don't know what to say. Sure, we could go into in depth detail on the character, but the bottom line is he's so ingrained in pop culture as one of the most iconic cartoon characters of all time that if you don't know about him at this point our only really advice would be to head to Youtube now.

Over the past eighty+ years, Popeye has been the star of comics, cartoons, full length films, and featured on pretty much any form of merchandise you can think of. Today we're looking at the fantastic toy line created by Mezco between 2001 and 2002.

Each figure featured fantastic sculpting and painting, making the toys look exactly like their cartoon counterparts. Each one also came packed with a magnificent array of accessories, and some even came with additional "smaller" figures. In total, sixteen figures were produced over the line's three waves - Each one spot on in detail. 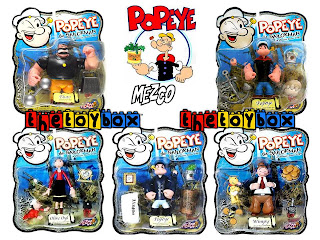 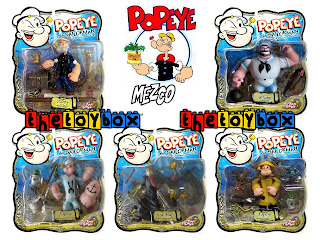 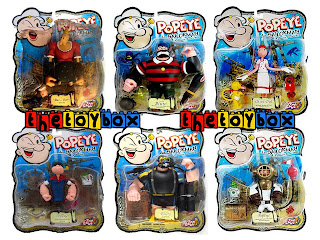 
For those looking for an even more classic rendition of the characters, check out the black and white three pack produced exclusively for FAO Schwarz. Granted you're not going to find this on toy shelves these days (or any of the figures for that matter). 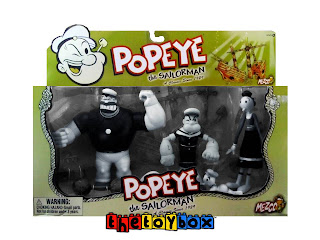 If you're lucky you can nab a complete loose figure for around $30.00, but we've seen them sell for as much as $60.00 a piece. Mint in the package is going to set you back all the more. As for the three pack - We've honestly never seen it on secondary markets, so we couldn't begin to guess what that would cost you.

Join us next time when we take a look at The World of Annie 6 Inch Dolls!

Click "HERE" to go back to the home page. For more posts related to this one, please click the labels below.
Posted by The Toy Box on September 05, 2013
Email ThisBlogThis!Share to TwitterShare to FacebookShare to Pinterest
Labels: 2000's, Bluto, Mezco, Olive Oyl, Popeye, Popeye The Sailor