Oooh...Ouch. When a film costs forty million to make, and you only see a return of forty-eight that definitely isn't going to translate into the franchise full of toys, comics, books and more that Universal Pictures was banking on. It probably didn't help the film at all that it was poised against other summer blockbusters such as Disney's The Lion King, and Jim Carrey's The Mask. It also didn't help when reviewers gave it mostly negative reviews with the consensus of being visually impressive but ultimately forgettable.

This didn't stop Kenner from diving head long into a toy franchise in hopes of cashing in on the film's expected success. With eight basic figures, one deluxe and four vehicles, the line was certainly ready to take off from the starting gate, and fill shopping carts across the world. Unfortunately this never happened. With lackluster sales, the toys were quickly reduced, and shuffled to clearance isles. 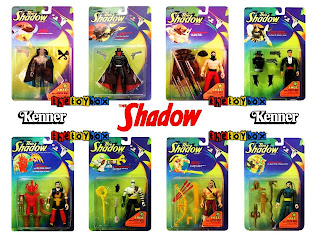 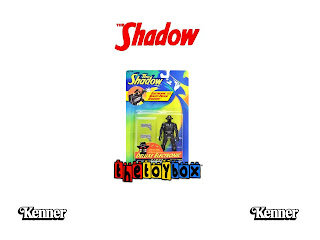 Worth noting is Nintendo originally planned to release a game based on the film for the Super Nintendo. When the film bombed they quickly backed out of the deal despite the game already being finished. 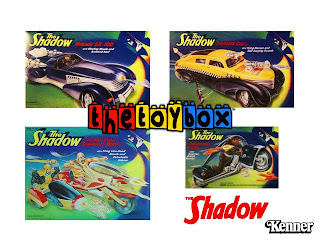 VEHICLES
Mirage SX-100 Car*Thunder Cab
Shiwan Khan Serpent Bike*Nightmist Cycle
﻿
Join us next time when we take a look at Defenders Of The Earth!


Click "HERE" to go back to the home page. For more posts related to this one, please click the labels below.
Posted by The Toy Box on September 16, 2013
Email ThisBlogThis!Share to TwitterShare to FacebookShare to Pinterest
Labels: 1990's, Alec Baldwin, Conde Nast, Kenner, Street and Smith, The Shadow, Walter B Gibson