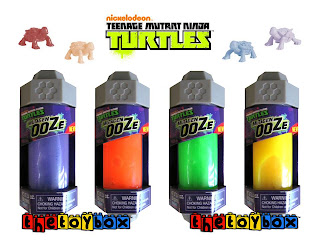 Did you miss the original batch of Mutagen Ooze from Nickelodeon's Teenage Mutant Ninja Turtles line?  Do you just want more?  How about in new colors?

Out on shelves now is an all new series of Mutagen Ooze.  Now you can nab one of four different neon colors of your favorite slimy goop to pour all over your plastic mutant friends.  The colors are; Green, Yellow, Purple, and Orange.

The packaging is also less bulkier, doing away with the mini "box" style, and going with a simple circular wrap around.  The case is the same triangular style as the previous release, holding twelve canisters of ooze, three of each color, now includes a small blurb on the front right which reads, "New!  More Ooze to Choose."

Each canister carries a price tag of $7.99 - Ouch!  That's a hefty price from these, especially considering most kids will just dump it everywhere, and it will be gone forever.  Even so, the original batch of ooze had a slow start when it first hit store shelves, but now is relatively scarce.  If you missed it the first time around, or simply want to add a new color to your collection, grab them while you can.

Another exciting aspect to these was that the promo catalogs inside of each one contained the new figures for series five - Spider Bytez, M.O.U.S.E.R.S., the two packages of Ninjas in Training, the non chrome version of Shredder 2, and smaller Battle Shell versions of the turtles which appear to coincide with the basic figure sizes.  For those of you collecting the deluxe, larger figures, there is also a section in the catalog for Throw N' Battle figures.  Truth be told, the catalog excited us more than the actual ooze.

Until next time, this has been News from The Toy Box!
Posted by The Toy Box on September 07, 2013
Email ThisBlogThis!Share to TwitterShare to FacebookShare to Pinterest
Labels: 2010's, Mutagen Ooze, Nickelodeon, Playmates Toys, Teenage Mutant Ninja Turtles, TMNT