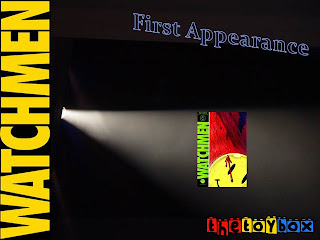 Written by Alan Moore and illustrated by Dave Gibbons, The Watchmen was a story set in an alternate reality which closely mimicked that of the contemporary world in the 1980's.  It begins with the death of The Comedian, which sparks concern from antihero Rorschace.  As he presses his investigation, he brings his concerns to each of his prior comrades as he feels that they too are marked as targets. 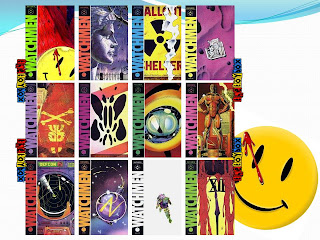 The series introduces us to characters such as Nite Owl, The Silk Spectre, Ozymandias, and Doctor Manhattan, with the latter becoming the focal point, and eventual climax to the story.  The dramatic mystery unravels in a tale that will both save and condemn the world.

Issue one launched in 1986 and the story concluded in 1987 with issue twelve.  The series elevated the comic book world of superheroes into the real world realm of classic literature.

As of today it has been reprinted several times in graphic novel format, and remains one of DC Comics most popular collected works.  With the release of the 2007 film, the series has only grown more in popularity.  The film has also been commemorated for being one of the most faithful adaptations from writen word to screen, with little Hollywood "filler" added.

Join us next time when we take a look at The Maxx!

Click "HERE" to go back to the home page. For more posts related to this one, please click the labels below.
Posted by The Toy Box on May 13, 2013
Email ThisBlogThis!Share to TwitterShare to FacebookShare to Pinterest
Labels: Comic Books, DC Comics, The Watchmen