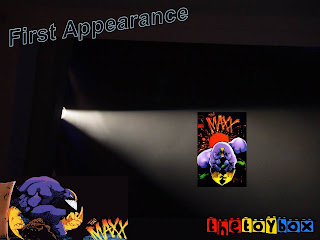 The Maxx, one of Image Comic's first series quickly became one of its most popular.  Created by Sam Keith, the series spans thirty-five issues between 1993 to 1997. 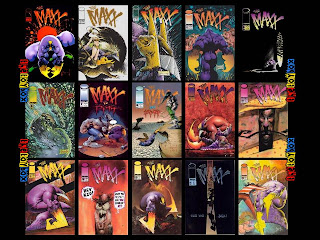 The story stars The Maxx who exists on two plains of existence.  In the real world he lives as a homeless man who often times is helped by a freelance social worker, Julie Winters.  In the alternate realm, The Outback, The Maxx serves as the protector of The Jungle Queen - coincidentally also Julie Winters, though she is unaware of this duel plain of existence.

When Mr. Gone is introduced, he starts making obscene phone calls to Julie.  Convinced he's just a strange nut, she ignores him.  In reality, this serial rapist is quite aware of Julie, and has access to both hers and many others Outbacks.  When The Maxx involves himself, saving Julie from Mr. Gone, he turns his intentions on the big purple guy, unleashing his canniblistic Isz creatures on him.  These various battles take place in both the real world, and The Outback. 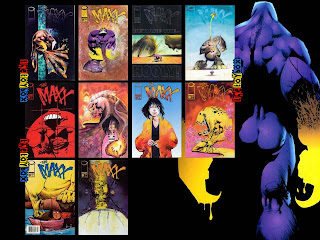 Eventually Gone makes Julie see the truth of her past, and how The Maxx came to be.  Several more aspects of her are revealed over time in various back stories.  One of the most important being about when she was raped by a hitch-hiker who also beats her, leaving her to die.  This in turn leads to the most vital to the story reveal of her past when she hits a homeless man with her car, and rather than help him drags him to an alley, and covers him with trash.  Julie also leaves a lampshade in the trash which brushed with The Outback.  When it touches the man it forms a mask, and the man becomes The Maxx.

Later in the series the story switches focus to a teen named Sarah who has been sent to Julie for counseling by her mother.  Her mother is concerned about Sarah's well being, and disciplines her constantly in hopes that she won't grow up to be like her father, who is eventually revealed to be Mr. Gone. 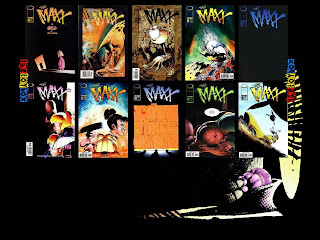 With the conclusion of this story, the series leaps forward several years focusing on Sarah (now spelled Sara), and a giant murderous banana slug from her Outback.  Julie and Dave (The Maxx) have vanished.  When they return, a deeper tale unravels regarding Julie and her son Mark.  Julie wants him to believe she is dead so he will stop looking for her due to the dangers of The Outback.

Time is unraveling for the group, and various alternate realities begin opening.  In the end the characters are all changed.  Some for the better, some for the worse, but all with a small knowledge of their past, but not enough to put all the pieces together.

In 1995 MTV optioned the rights to produce an animated series which closely followed the comic book story.  Sadly, it only lasted seven episodes, and doesn't cover the entire comic series.

Join us next time when we take a look at Sandman!

Click "HERE" to go back to the home page. For more posts related to this one, please click the labels below.
Posted by The Toy Box on May 16, 2013
Email ThisBlogThis!Share to TwitterShare to FacebookShare to Pinterest
Labels: Comic Books, Image Comics, MTV, The Maxx