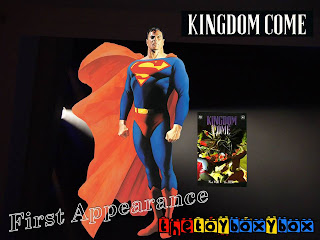 What do you get when you cross writer Mark Waid with artist Alex Ross?  One of the most amazing pieces of comic book literature to date!  Kingdom Come was the collaboration of the duo which takes place approximately twenty years into the DC Universe time line, and quickly became a critical success. 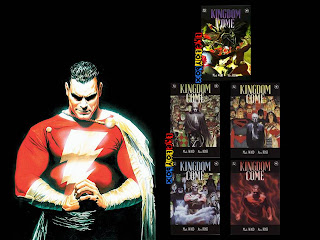 The majority of superheroes the public had come to love - Superman, Wonder Woman, Green Lantern, etc. have either retired, disappeared, or are working through unseen indirect means.  A new generation of heroes and villains run rampant, causing mass destruction of private property, carnage, and even death.  In their battle to destroy each other the defenseless human race has been caught in the middle.

Just as things seem to be on the brink of helpless, "Look!  Up in the sky!  It's a bird, it's a plane..."  Superman returns to reunite the heroes of old to reign in the heroes and villains of new.  It pits the aged experience against the untrained youth, and brings with it a world destroying climax that has to be seen to believe.

Though the majority of the attention is on this focal point, the story actually unfolds through the eyes of Norman McCay, an elderly pastor who serves as both the narrator and human guide for the Specre.  We see through McCay the full extent of destruction that those who swore to serve us can bring about when provoked, as well as the bleak future their unwatched power can unleash on the world.

Though a sequel was planned, Ross and Waid disagreed heavily on its aspects.  In the end Ross left the project.  While scenarios from their concepts have made their way to one shot books, no official sequel has been produced.

In closing we'd like to say how tough it was to whittle down this list to the few posts we crammed into the month of May.  There were several more titles which we would have loved to have done, such as; Groo The Wanderer, Infinity Gauntlet, Star Wars, Preacher, The Tick, 30 Days of Night, Boof, and so on, and so on.  But, there are only so many days in a month, and only so much time to compile posts for deadlines.  Perhaps we'll revisit comics in September - the 25th is after all National Comic Book Day.

Join us next time when we return back to toys with Vikings!

Click "HERE" to go back to the home page. For more posts related to this one, please click the labels below.
Posted by The Toy Box on May 30, 2013
Email ThisBlogThis!Share to TwitterShare to FacebookShare to Pinterest
Labels: Alex Ross, Comic Books, DC Comics, Elseworlds, Kingdom Come