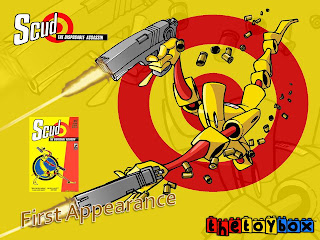 In 1994 Rob Schrab did an impresive thing.  He released a self published comic book that not only went on to be financially successful, but also have a strong cult following.  For many people, finding issue one was an amazing feet.  So much so that when the book caught on early, a second printing was released. 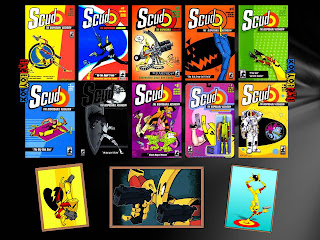 However, not being able to find book one may have been what put Scud on the map for cult success.  While containing the main premise of the series, book one is actually one of, if not the worst written installments in the series.  It consists of random one liners, most of which are derived from classic B movies.

Scud The Disposable Assassin follows the "life" of the same named character as he comes to terms rather quickly with being a robot designed to kill, and then self destruct.  This is discovered in the first issue when he catches a glance of the "warning label" on his back in a mirror which informs him of this.

Not wanting to die, Scud instead mortal wounds his target, Jeff, and from there continues his life as an assassin, using his money for future kills to pay the medical bills to keep Jeff alive. 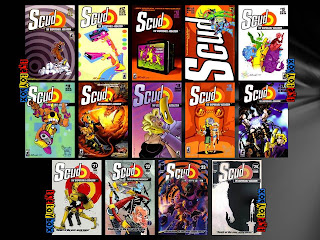 The series ran consecutively for twenty issues, each growing weirder than the previous one.  At times the story got incredibly convoluted, and even random.  This started to turn many fans off of the series, including its creator, Schrab.  The book went on indefinite hiatus.

It wouldn't be until 2008 that Schrab would return to the series to give all his long awaiting fans an ending to the story of their favorite yellow robotic assassin.  He had initially been approached by Image Comics who wanted to produce an ombnibus of the issues already available, but rather than release an unfinished product, Schrab instead instead took the opportunity to finish his story.  Each of the remaining four books featured a guest artist for the cover.

Since its completion, the series in its entirety has been gathered into the very thick graphic novel, "The Whole Shebang".  It's available in both paperback and hardback, and is probably the cheapest alternative to purchasing the series.  The individual books are readily available, but the majority of sellers are simply asking too much for them resulting in no sales.


Join us next time when we take a look at Akira!

Click "HERE" to go back to the home page. For more posts related to this one, please click the labels below.
Posted by The Toy Box on May 06, 2013
Email ThisBlogThis!Share to TwitterShare to FacebookShare to Pinterest
Labels: Comic Books, Fire Man Press Limited, Image Comics, Rob Schrab, Scud, Scud the Disposable Assassin