For those of you who fondly remember the film Who Framed Roger Rabbit, consider reading the original novel Who Censored Roger Rabbit? by Gary K. Wolf, in which the film is loosely based on. You'll get a whole new story, and quite honestly, a less Kid friendly version.

With that said though, Who Framed Roger Rabbit was an amazing movie. Not only did it push the limits of technology during its time with its flawless blend of live action and animation, but simply put, the movie was good. The characters were likable, the cast superb, and the story fun.

With its blending of Disney and Looney Tunes characters, the film brought with it a re-emerging interest in golden age of American cartoons. The down side this was that with this, it also brought fourth a lot of attention on what may have been periodically correct jokes at the time, but certainly wasn't politically correct anymore. This unfortunately led to a lot of classic cartoons being heavily edited when being re-aired for a new generation.

The film follows characters Roger Rabbit (voiced by Charles Fleischer), and Detective Eddie Valiant (played by Bob Hoskins) as together they try to solve the mystery of just who framed Roger Rabbit. In the process we meet several interesting and key animated characters such as Benny the Cab, Baby Herman, Smart Ass (the leader of the weasels), Jessica Rabbit, and the live action characters Dolores and Judge Doom. Everything is weaved together perfectly to provide a film Noir sense and setting, with a fun yet interesting story.

Unfortunately LJN was a company well known for doing things cheaply, and ruining a lot of franchises. They have been blamed countless times for producing some of the worst Nintendo Entertainment System franchised based games, and when it comes to toys produce some of the lowest quality ones you'll find. This is sad, yet interesting at the same time.

It's sad because a lot of big name franchises such as Roger Rabbit, which have a plethora of characters to choose from ends up being a short lived series due to the lack of excitement the toys generate.

It's interesting because despite this, LJN seemed to be awarded a lot of contracts during the 80's for high budget movie licenses. 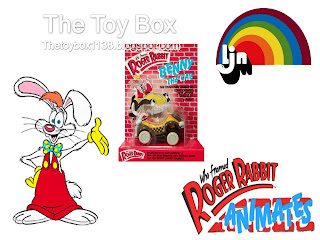 LJN produced two separate lines based on the film in 1988, but both were essentially the same. The first line, which we will look at today were the Animates. The second line was the Flexies (AKA bendable figures).

The Animates figures had limited joint movement, typically only in the legs and arms, and were pretty poor renditions of the characters from the film in terms of sculpting.

Out of the entire series, Benny the Cab was the only saving grace, and to be honest, while packaged the same, and almost large enough to accommodate one figure at a time, has no indication on the actual package that it is part of the Animates line - Though most collectors consider it to be.

All and all, it's a pretty sad line, and if anything it is a perfect example of what not to do. As we said above, LJN has a history of repeatedly destroying high budgeted movie licenses, and we really aren't sure how they continually got contracts for them.

Unfortunately for Who Framed Roger Rabbit no other company has ever stepped up to the plate to produce a definitive collection of toys. With Disney holding the rights to film, we don't see this happening any time soon either as they have always been incredibly protective of their licensed properties. I suppose this one just has to be filed under, "Take the good with the bad."