Charmed (State of the Art Toys)

Charmed was one of the leading shows for the now defunct WB Television Network from 1998 to 2006. The show initially stared Shannen Doherty, Alyssa Milano, and Holly Marie Combs as sisters Prue, Phoebe and Piper. Doherty's character was removed from the series after series three, and replaced by youngest sister Paige played by Rose McGowan. While it has never been confirmed why Doherty left the show, it has been confirmed by both her and Milano that the two actresses never got along.

With the sudden departure of Doherty, the future of Charmed was questionable. However, rather than lose ratings, the series actually became even more popular, running for an additional five season. When the series ended at the end of season eight, there were 178 episodes in total. 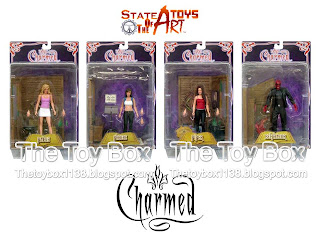 In 2004, State of the Art Toys (or SOTA for short) produced two series of figures based on the show. The basic line included characters from the current cast line up including protagonist Belthazor played by Michael Bailey Smith for 14 episodes.

CineQuest.com offered four exclusive figures through their online site which included the same figures from the first series, just in different clothing. What is interesting about these exclusives is that the character Paige received two figures, as opposed to the other characters who only got one variant. 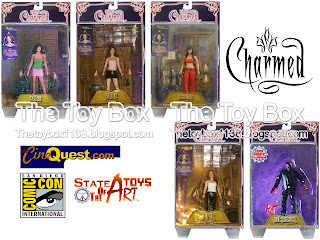 The final exclusive for the series was the transparent Belthazor figure which was released at San Diego Comic Con. To date it is one of the most difficult figures to get, especially mint in package. 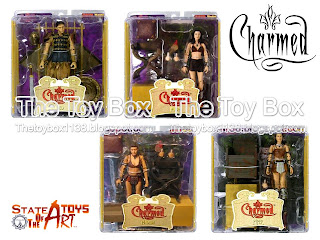 In 2005 SOTA released a second and final wave of figures. The series once again included the three girls from the current cast line up, as well as Leo played by Brian Krause.

Unlike the first series which utilized large bubble packaging over cardboard backers, the second series came packed in PVC packaging. It is arguable that astatically wise, the first series packaging was more appealing. Both series came packed with an incredible amount of accessories and background pieces - Such as the attic "playset" which could be assembled by accumulating all the series one figures.

Despite repeated requests from fans and collectors, a figure based on Doherty's character was never released. It is possible that the actress would not license her likeness to the company due to her sudden departure from the series, but much like why she left the series, its unknown as to why the figure was never made. We attempted to contact SOTA toys regarding this, but as of this posting have received no comment.

Today the figures can be found for roughly ten dollars a piece with the exception of the San Diego Comic Con Belthazor which sells for fifty to sixty dollars.

Join us next time when we take a look at Knight Rider!