Kevin Smith seems to be one of those writer/directors that you either love or hate. Rarely have we met anyone in the middle ground of that spectrum. Of course, now we're going to tell you that we are some of those rare few in the middle ground. For us, his movies are hit or miss. Either it's incredibly entertaining, or a flat out dud. We'll spare you our own personal opinion on which movies we think which way about.

Smith started his career with the film Clerks, which was coincidentally filmed at the convenience store in which he himself worked. The film was sent to the Sundance Film Festival, where it was picked up by Miramax. Despite its limited running, the film picked up a strong cult following of fans, and Smith went to work on his second film, Mallrats.

In 2000, Clerks was adapted into an animated series for ABC. After two episodes out of the six ordered aired, the series was cancelled. While the major contributing factor to the series quick demise was ratings, it is argued that the ratings were so low due to the episodes being shown out of order. ABC launched the show with episode four, and then proceeded to episode two. However, since the audience wouldn't have known this at the time, it's hard, if not impossible, to find any truth to this argument.

In 2003 Graphitti Designs developed a series of action figures based on the concept designs for the animated show. However, unlike the show, the toys found major success in the toy isle. Despite being based on the overall design of the animated series, the toys didn't stay bound to this particular realm, and instead spread out from series to series to the various films by Smith. 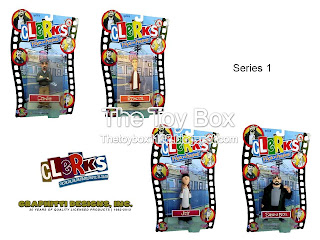 
Series one was based solely on the figures from the film Clerks, and included the majority of the major characters - Dante, Randal, and of course Jay and Silent Bob. Unlike your typical action figure, these were sculpted to have no moving parts, and also contained no accessories. With this in mind, we're not actually certain that these qualify as action figures, or miniature plastic statues. Either way, fans loved them.


Each character from the first line was produced in black and white, and mounted on black and white cards as sort of a nod to the movie which was filmed in this fashion. These four particular figures were sold exclusively at Wizard World, but despite the lack of color were the exact same figures as seen in the first series. 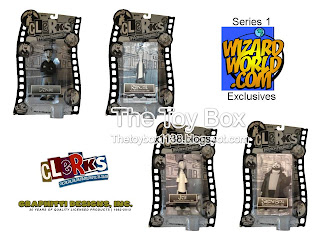 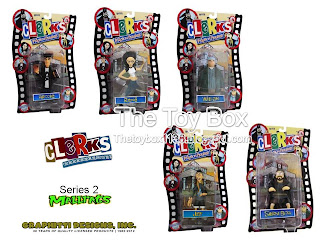 
Series two was based on the film Mallrats, and while five figures were produced, there were several other characters that could have and should have been made, to and include the main character and focus point of the film, TS, and to a lesser extent his girlfriend, Brandi. Of course, there are others we would have like to have seen included, but listing them all could make this list go on and on.

We did however get Brodie, Rene, Willam, and another set of Jay and Silent Bob figures. Surly the last two could have been substituted with other characters, especially considering the first series included them...


...And here's where those particular main characters not being produced really annoys us. Rather than produce character that were actually essential to the film as figures, two of the three exclusives produced were nothing more than characters with one line in front of the comic shop.

San Diego Comic Con got the exclusive Steve-Dave and Fanboy - Two characters that were on screen for no more than five minutes and between the two of them said (maybe) ten words.

An exclusive Brodie was also produced for Wizard World, but the only difference between the exclusive version and the series 2 version is the label on the front of the package, and the item held in the figure's left hand. 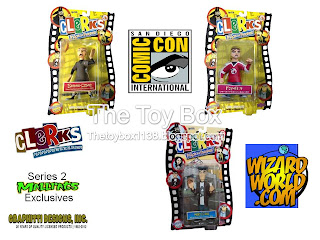 These three figures would be the last "film" related exclusives released in the series. 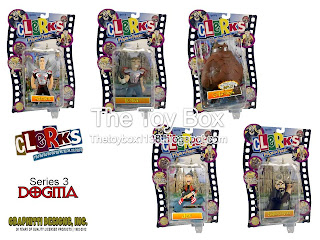 
Series three moved into the film Dogma, and with it brought five new figures, which again included another Jay and Silent Bob. This time around, Graphitti Designs really dropped the ball in producing the main characters from the film.

Linda Fiorentino's character Bethany, who is only the main focal point of the film, doesn't even appear to have been a thought in anyone's mind when producing the figures. Out of the five figures produced, three seemed fairly unnecessary - Jay, Silent Bob, and Golgothan. The Jay and Silent Bob figures were mainly unnecessary because so many versions had already been produced.

The other two figures released were Loki and Bartleby. 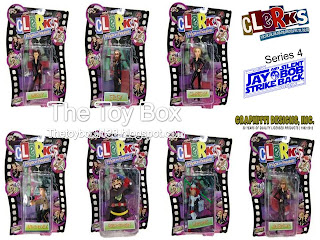 JAY AND SILET BOB STRIKE BACK


Series four based on the film Jay and Silent Bob Strike Back would be the largest series produced. While another set of Jay and Silent Bob figures were produced, this time around it was actually appropriate as the characters assumed their alter egos Bluntman and Chronic.

The other five figures produced were Marshal Willenholly, and the four fem fatales, Missy Chrissy, Sissy, and Justice. 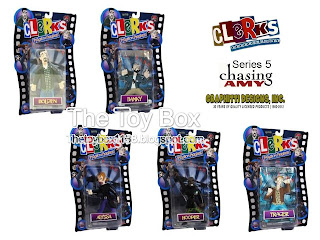 
The final series, series 5 was based on the film Chasing Amy. Here is where Graphitti Designs dropped the ball yet again. How can you create a series of figures based on a film called Chasing Amy, and then not produce a figure based on the title character? Out of the five figures produced, not one was the aforementioned Amy.

Instead, what was produced were; Banky, Holden, Alyssa, Hooper and Tracer.


Graphitti Designs and Kevin Smith took the idea of exclusives to the brink of ridiculous. While they're done in the style of the series, many collectors don't consider the 10,000 Kevin Smith variations to be a part of it.

None of the figures were any different in design other than the paint job they got, and they were sold all over the place - Mainly at conventions where Smith was making appearances. Thus the cancelled orange and black colored jersey figure as seen in the first photo. Due to Smith cancelling this particular appearance, the figure was never produced - or rather, never released. 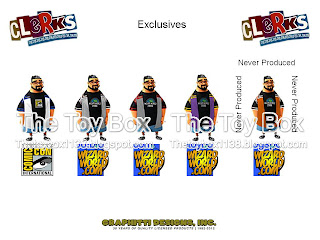 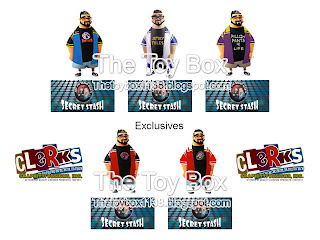 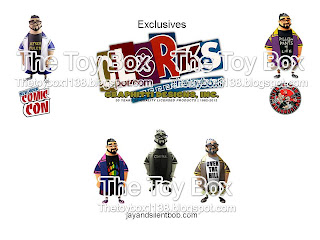 It doesn't appear that any new figures are on the horizon (unless of course there are more variations of Kevin Smith exclusives in the works), which is a shame. This series had so much room to grow with characters that were never included the first go round. The final series, Chasing Amy was officially released in 2006, and with how much time has passed, there is really no reason to expect anything new for the series - Though stranger things have happened.

Join us next time when we take a look at Pink Panther!

Click "HERE" to go back to the home page. For more posts related to this one, please click the labels below.
Posted by The Toy Box on November 12, 2012
Email ThisBlogThis!Share to TwitterShare to FacebookShare to Pinterest
Labels: 2000's, Chasing Amy, Clerks, Dogma, Graphitti Designs, Jay and Silent Bob Strike Back, Kevin Smith, Mallrats, View Askew