Cult classics come in many different genres - Horror, Comedy, Drama, Action, etc Be it big budget Hollywood blockbusters, or small, independent films, one can never tell what films are destined for this status quo among fans. It simply just happens.

The problem with cult classics is that while the films may go on to spawn several sequels, they don't necessarily have the "main" cast aspect to them that would garner the possibility of a toy line. Take for example your average slasher flick. Sure there are tons of actors in the film, but most of them are just fodder for the real star - The killer.

This is where Neca's Cult Classics line has you covered! Want Eric Draven from The Crow? No problem. The Tall Man from Phantasm? No problem. David and Michael from The Lost Boys? No problem. Between 2005 to 2008 in its basic and Hall of Fame line, Neca has covered a whole lot of territory - Or dare we say, terror-tory.

The quality of each figure sets the bar incredibly high for every other toy company out there. Not only are the sculpts of the figures spot on to their corresponding film(s), but so are the accessories.

The use of the original movie posters for the sidebar section of the packaging works fantastically, and the unique backdrop behind each figure magnificently matches the "world" in which they come from. It is so obvious that Neca put every bit of thought into this line before proceeding, and ensured that no one figure was any more important than the next.

Because each line comprised of several different characters from several different films, there was no need to collect every figure from each series if they didn't particularly interest you. One could easily obtain the figures of their liking, and not feel like their collections were incomplete.

Unfortunately, beyond that, there isn't much more to say on this amazing line. So with that, we hope you enjoy the complete look below at all the figures. 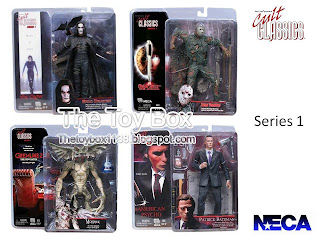 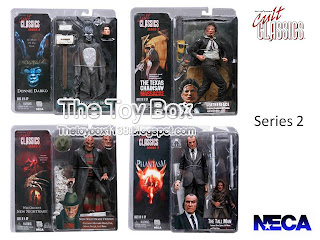 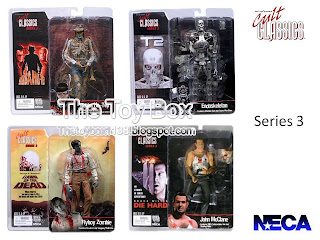 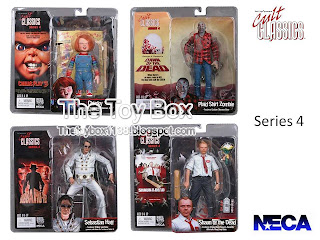 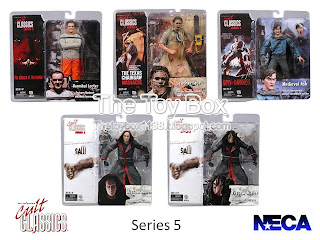 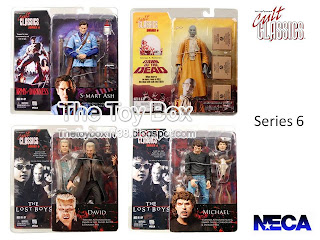 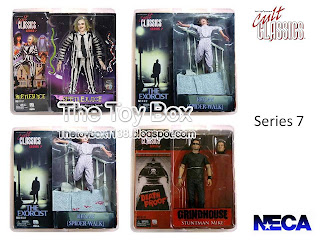 
While the majority of the Hall of Fame figures were new, a couple were re-released versions from the basic line. 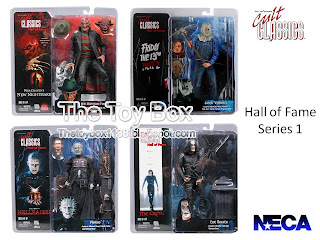 
Zombie Ed from Shaun of the Dead was slated to be released, but never was. There have been several eBay listings for prototype versions of the figure, but it is unconfirmed if these are official prototypes or "black market" mock ups. Either way, the figures look pretty nice. 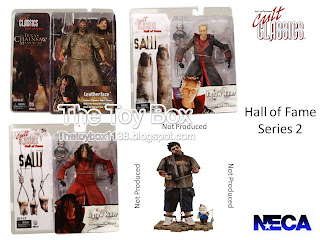 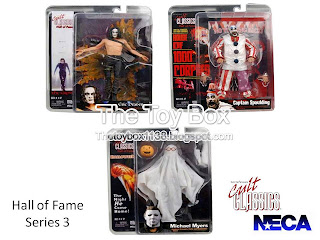 
Four box sets were produced for the line, each based on a specific film series. 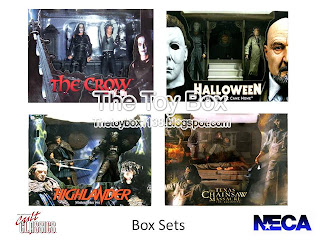 The Crow*Halloween: The Night He Came Home*Highlander: Medieval Set: The Texas Chainsaw Massacre: The Beginning


Along with the two pack box sets, there were also two pack PVC packaged sets. 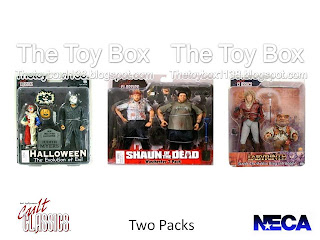 Halloween: The Evolution of Evil*Shaun of the Dead: Winchester Two Pack*Labyrinth: Jareth the Goblin King and Hoggle


Towards the end of the line a couple figures were released under the banner, "Cult Classics Presents". The real prize from this set was the figure based on David Bowie's character Jareth the Goblin King from the film Labyrinth. 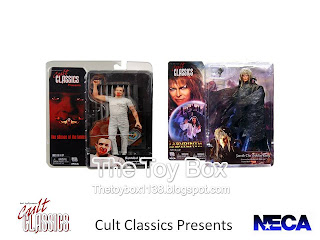 
Since the initial line, Neca has gone on to produce several sub sets of "Cult Classics" sets - Typically under the banner of "Cult Classics Presents." Neca shows consistent care for the figures they produce, and hold to a standard of quality that far surpasses many toy companies today. We look forward to seeing what they have in the works for the future.

Join us next time when we take a look at The Year Without A Santa Claus!

Click "HERE" to go back to the home page. For more posts related to this one, please click the labels below.
Posted by The Toy Box on November 29, 2012
Email ThisBlogThis!Share to TwitterShare to FacebookShare to Pinterest
Labels: 2000's, Cult Classics, Cult Classics Presents, Hall of Fame, NECA