Wallace and Gromit: The Curse of the Were-Rabbit (McFarlane Toys)

It's a double edged sword for independent artists to make it big. A lot of times they lose the original fan base that made them what they are, all while hearing accusations that they've sold out, or lost sight of what made their concept "good".

On the other hand, they gain a new fan base, and sometimes in the process, a whole lot more money than they ever would have made with their original fan base, and even more so important than the money, worldwide notoriety.

Fortunately for Nick Park, there was a small middle ground he was able to take between the two paths. Mr. Park has been able to bring his creation of the characters Wallace and Gromit to a worldwide notoriety standpoint, while at the same time keeping his series of characters grounded in the realm of which they were first introduced. We're sure that with that came a whole lot of money as well.

The characters have been described as, "positive international icons of both modern British culture in particular and the British people in general." The short films themselves have won several Academy Awards, and even spawned a full length feature film - The Curse of the Were-Rabbit. 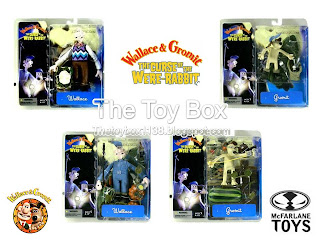 When the feature length film was released in 2005, McFarlane Toys followed suit with eight action figures to coincide with the movie - Though technically two of those eight figures are different versions of the main characters.

What stands out the most in this set of figures is how McFarlane Toys was able to capture the actual look of the claymation counterparts in every aspect. From facial features, to clothing, the figures are easily recognizable to fans thanks in part to their spot on plastic renditions. 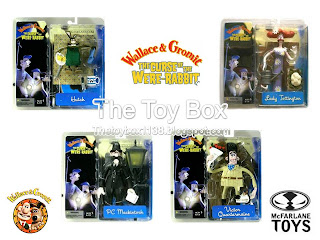 McFarlane Toys never seems to stray far from the standard PVC packaging they are accustomed to for their basic figures - Figure on the right side in a bubble, cardboard tab to the left. This has worked for them for so long that we dare say they will never seek alternative packaging options. It's not necessarily a bad thing, but it gets bland for collectors seeing the same packaging style over and over again. Yes, we know that packaging adds to the overall cost of the figure inside, but we sure wish someone would get creative with it. The Goonies packaging from Mezco comes to mind when we say this. 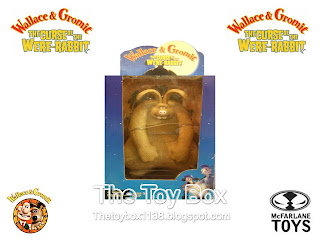 The one and only deluxe figure was the larger Were-Rabbit. The figure came packed in a larger window style box, and was about two to three times larger than the basic figures.

Today the figures sell for about ten dollars each, not bad considering that actual retail prices were around twelve to fifteen dollars when the toys were initially released.

Join us next time when we take a look at Who Framed Roger Rabbit: Animates!

Posted by The Toy Box on November 19, 2012
Email ThisBlogThis!Share to TwitterShare to FacebookShare to Pinterest
Labels: 2000's, Gromit, McFarlane Toys, Nick Park, Wallace, Wallace and Gromit the Curse of the Were-Rabbit