Say what you will about David Hasselhoff. The man has a way of turning garbage into gold. Be it television, movies, or music, he's managed to turn a buck in them all, sometimes purely by playing himself, and not even a character at all. Do you realize how popular you need to be to be able to play yourself in a movie?

The original Knight Rider series began airing in 1982 and ran until 1986 for a total of 90 episodes over four years. While David Hasselhoff was billed as the star of the show, a good portion of viewers tuned in for Kitt, the talking, self driving and self aware car.

The series revolved around the partnership of Michael Knight (Hasselhoff), and Kitt (voiced by William Daniels). The two are brought together in the pilot episode when self-made billionaire Wilton Knight rescues police detective Michael Long after a near fatal shot to the face, giving him a new identity via plastic surgery, and a new name - Michael Knight. Wilton selects Michael to be the primary field agent in the pilot program of his Knight Industries-funded public justice organization, the Foundation for Law and Government (FLAG).

Other notable characters were Devon Miles played by Edward Mulhare. Devon was the leader of FLAG, who appeared in nearly every episode to provide mission details to Knight and KITT. He was shadowed by Patricia McPherson as Dr. Bonnie Barstow in the first season who served as KITT's chief technician and as romantic tension for Michael. McPherson was dropped after the first season, and replaced by Rebecca Holden who played April Curtis throughout the second season. After tremendous fan backlash, including lobbying by Hasselhoff and Mulhare, McPherson was returned to the show for the final two seasons (3 and 4). 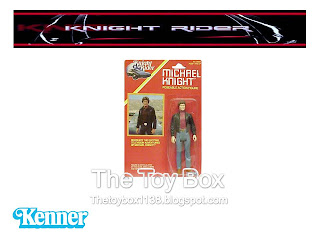 With the success of Knight Rider on the rise, Kenner licensed the rights to produce toys based on the show in 1983. The line focused mainly on the car, and never really capitalized on the characters with the exception of producing one version of Michael Knight.

The figure came packed on a fairly bland red card back which had a small square to the left of the bubble for a photograph of David Hasselhoff portraying the character. The figure was touted as being poseable, but really only bent at the arms and legs, and had the ability to turn the head. This was an unfortunate aspect that was leaving Kenner behind quickly in the world of action figures due to the impressible poseability of new toys such as G.I. Joe and Transformers. 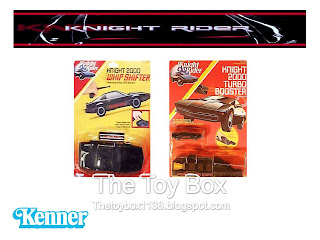 The line didn't tend to stick with formatted toys to the size of the figure. For example, the Whip Shifter was approximately the same size as the figure (in length), and the Turbo Booster utilized the size of a car typical to those found in Hot Wheels sets. 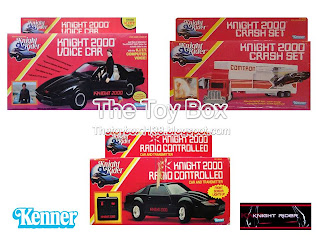 The Voice Car was really the only toy compatible with the Michael Knight figure. Even then it was somewhat of a pain to cram the figure inside the front seat due to its limited poseability. Interesting enough is that the car actually comes with a packed in figure, making the individual carded one a rather pointlessly produced piece.

The Crash Set was a truck designed to coincide with the Turbo Booster set. The idea was to launch the car from the booster station through the side of the truck.

Last was the Radio Controlled Knight 2000. The vehicle was exactly what you would expect from the title - A remote control car.

Despite the vast differences in compatibility and proportion to each other from toy to toy, many collector's feel that all these pieces encompass the entire set, and anything less would be incomplete.

It's a curious question as to why the toys were titled Knight 2000, and not Knight Rider. Even today it causes confusion among collectors who confuse the line as something more current due to the "2000" in the title.

Today it's rather easy to track down the majority of the items from the series. The difficult part is finding someone selling it for a reasonable price. Depending on the items you're looking for, sealed pieces can sell anywhere from $100.00 to $300.00. Opened ones go for considerable less (typically under $50.00).

In a recent poll, Knight Rider was voted as one of the top twenty shows that fans would like to see remade for television today. Whether or not that dream becomes a reality is yet to be seen. But, in this day and age of television, anything is possible.

Join us next time when we take a look at Marvel's Gold!

Click "HERE" to go back to the home page. For more posts related to this one, please click the labels below.
Posted by The Toy Box on November 05, 2012
Email ThisBlogThis!Share to TwitterShare to FacebookShare to Pinterest
Labels: 1980's, David Hasselhoff, Kenner, Kitt, Knight 2000, Knight Rider, Michael Knight