Marvel's Gold was a short lived series that was produced by Toy Biz between 1998 and 1999. What made this line unique from others was that ever figure (out of the eleven produced) were limited edition productions (ranging from 7,500 to 10,000 per piece), and were initially released only in specialty shops. The line comprised mainly of figures that had never been produced before, and at the same time didn't fit into any lines that had already been developed. While it's arguable that without this line, several of these figures would never have been made, at the same time it's disappointing the way it was handled. 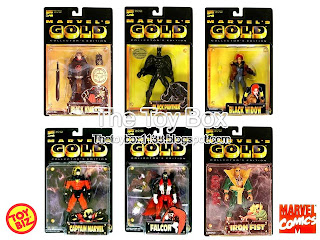 Each figure was produced by cannibalizing other figures, and slapping a fresh coat of paint on them. While this is common practice in the action figure world, it was so blatantly obvious in the Marvel's Gold line. Especially since none of the figures contained any new sculpts (with the exception of some clothing items).

However, this is not to imply that the line is bad. In fact, it's rather impressive. The fact alone that some of these characters have been immortalized in plastic is enough to get any fan to seek them out. Plus, customized from another figure or not, with the paint job, they look pretty cool. 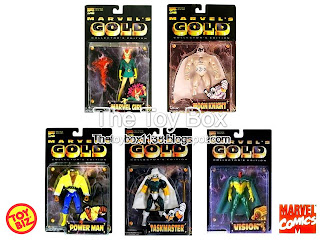 Due to the high wholesale cost of retaining the figures as exclusives, several shops later sold their overstock to various retail franchises, or lost them in bankruptcy settlements. As a result, what once started out as an exclusive item became fairly common in retail hot spots - until the production numbers ran out that is. This in turn has killed what was otherwise anticipated to have been a high value item on the secondary market - With most figures selling for as little as ten dollars each today.

For those seeking to hunt down the figures, they are as follows;


Join us next time when we take a look at Clerks Inaction Figures!

Click "HERE" to go back to the home page. For more posts related to this one, please click the labels below.
Posted by The Toy Box on November 08, 2012
Email ThisBlogThis!Share to TwitterShare to FacebookShare to Pinterest
Labels: 1990's, Comic Book Toys, Marvel Comics, Marvel's Gold, Toy Biz