When most people think of the Pink Panther, they say, "Oh, that was that cartoon." While this is of course true, many don't realize that the cartoon only came about as a result of the opening sequence to the original live action movie staring David Niven and Peter Sellers. In the opening sequence, the animated Pink Panther as seen in the cartoon series is shown interacting with the credits in a comedic way. The character became so popular with United Artist executives that they ordered a series of theatrical animated shorts.

The first short, 1964's The Pink Phink was so highly acclaimed that it won the Academy Award for best Animated Short Film. By 1969 the shorts were being broadcast on television for The Pink Panther Show, and with the popularity of the show spawned new shorts for both television and theater screens.

Today the Pink Panther has been seen in several more formats - Comics, video games, advertising campaigns, and several venues of merchandise. However it wasn't until 2004 that the iconic character would be made available in plastic via action figure format. 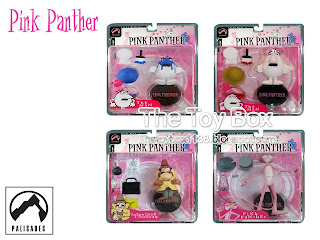 Palisades is not a company best known for its honest business practices, but despite this major flaw that led to its eventual bankruptcy and unfortunate closing down, they made some fine action figures during the time that they had. The figures based on the animated Pink Panther series are no exception to this rule.

Each figure was masterfully sculpted to match the characters on screen, with wonderful paint jobs to top it all off. The figures were all packed with an assortment of accessories, and were typically those as seen in the various shorts. 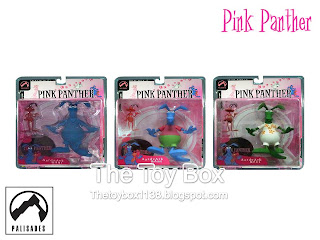 The packaging was the familiar PVC style bubble package that Palisades was accustomed to using. It was eye catching with its bright pink background and white magnifying glass artwork incorporated into it, but at the same time wasn't all that impressive. Small pictures of the characters were at the top of the package, designed in an interactive nature around the logo, but at the same time are very easily missed if one is skimming (as opposed to focusing on) the front of the package.

Variants also seemed to be the name of the game. In the one and only series produced there were a total of 3 variants. Considering there were only four characters produced, that's an impressive ratio of chase figures to hunt down.

The four figures produced were; Pink Panther, The Man, Aardvark and Ant (technically a two pack), and Inspector Clouseau. From those four two variants of Aardvark and Ant were produced (colored clothing versions), as well as a variant of The Man (blue paint splatter). 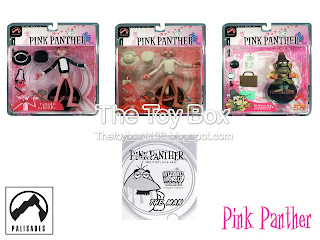 To round off the series, there were four exclusives made available. Unfortunately these weren't necessarily of any new figures, but rather variant versions of the prior basic series of figures.

It's true that it could be argued that the Pink Panther in tuxedo figure is a new design, but upon closer investigation it's the exact same figure, just with a tuxedo sculpted on top. This hardly passes as anything new in our book.

The following is a list of the exclusive figures as well as the locale in which they were available;

All of the exclusive figures were available in the same PVC packaging as the basic figures with the exception The Man which came in a small black and white box.

With Palisades out of the picture in terms of toy companies, the future of Pink Panther figures looks bleak. With people tightening their wallets more and more each day, companies are taking less risks with new items, and sticking closer to the tried and true merchandise. This is a shame because we as collector's are missing out on some potentially really great merchandise, and companies are missing out on what may very well be the next biggest and best thing.

Join us next time when we take a look at Wallace and Gromit: The Curse of the Were-Rabbit!

Click "HERE" to go back to the home page. For more posts related to this one, please click the labels below.
Posted by The Toy Box on November 15, 2012
Email ThisBlogThis!Share to TwitterShare to FacebookShare to Pinterest
Labels: 2000's, Aardvark, Ant, David Niven, Inspector Clouseau, Palisades, Peter Sellers, Pink Panther, Steve Martin, The Man, United Artist