It's a line that has been quoted since the film was released. It's been the object of many a parody, and remixed into numerous techno songs to date.

However, there would be no movie if it weren't for the 1998 limited comic series by Frank Miller. The series was initially published as five individual monthly comics, but since then has been reproduced countless times in collected editions with over ten different print runs. The collected editions themselves have sold over 100,000 copies. As far as comic books are concerned, that's a lot.

Much like the movie, the book follows King Leonidas of Sparta who gathers 300 of his best men to fight the upcoming Persian invasion. In the end, the remaining Spartans are aware of the suicide battle of which they are about to take place, and accept is as the humble and strong warriors they are, fighting to the very last man.

Though the book has been critically acclaimed, probably more in part due to the success of the film, several comic artists and writers have criticized Miller as being historically inaccurate, and even made remarks such as, "Pick up a history book, Frank." However, the biggest outcry over the series are from people who are up in arms over the line, "Those boy-lovers," which is said by a Spartan in reference to the Athenians, and was meant to imply that they practiced blatant homosexuality on the battlefield. This again circles back to those saying that the book is historically inaccurate as even Spartans are believed to have done this. Miller has since responded to these particular comments saying;

"If I allowed my characters to express only my own attitudes and beliefs, my work would be pretty darn boring. If I wrote to please grievance groups, my work would be propaganda. For the record: being a warrior class, the Spartans almost certainly did practice homosexuality. There's also evidence they tended to lie about it. It's not a big leap to postulate that they ridiculed their hedonistic Athenian rivals for something they themselves did. "Hypocrisy" is, after all, a word we got from the Greeks. What's next? A letter claiming that, since the Spartans owned slaves and beat their young, I do the same? The times we live in." 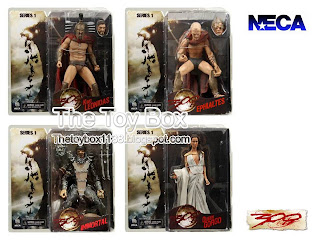 But, we digress. We've gotten slightly off topic here.

With the success of 300 in movie theaters, Neca licensed the rights to produce a small set of figures based on the film. While the figures where high quality, and impressive in detail, the line failed to find a strong foothold in the toy isle. This is due in part to the fact that the majority of the figures produced were secondary characters from the film. Neca should have instead focused on the main characters, which would have most likely boosted sales to at least warrant a second series.

The packaging itself was also not very eye catching. When every other toy company out there is producing figures packaged in standard PVC packaging, it's best to have a colorful, eye catching backdrop for the packaging. The series instead went with a darker tone, which while it matched the look and feel of the comic series and film, failed to be noticeable in toy isles. 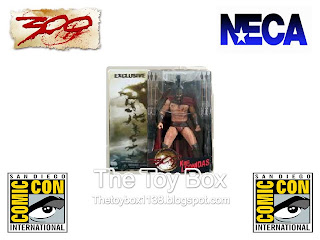 Neca followed up the series with a San Diego Comic Con exclusive of King Leonidas. However, this was just the same basic figure with red paint meant to mimic blood splatter on the figures body. Much like the basic line, it didn't excite many fans.

Today the figures do incredibly poorly on the secondary market. Figures mint in package can be found for as cheap as $5.00. That's pretty bad for a line that cost three times that for one figure when they were first released.

The figures aren't bad, but they fall into the same trap that so many toy lines have fallen into since the dawn of time. That trap is that people think that just because a movie has the potential to be successful, that a toy line is necessary. We're not saying that a toy line of 300 should have never have been made, but perhaps its success would have been found around a ten year anniversary point of the film when people could potentially be looking for a piece of that nostalgic feeling from seeing them. It's tough to say, and every answer is potentially right or wrong. But, that's how it always is in the world of action figure marketing.

Join us next time when we take a look at Cult Classics!

Posted by The Toy Box on November 26, 2012
Email ThisBlogThis!Share to TwitterShare to FacebookShare to Pinterest
Labels: 2000's, 300, Frank Miller, NECA