Since its release in 1985, three of its stars; Sean Astin, Josh Brolin, and Corey Feldman have gone on to see major success in Hollywood. Of course, writers Steven Spielberg and director Richard Donner have managed to make fair careers as well since then (sarcasm, got to love it).

The film is a timeless classic, with a strong following. Even today rumblings of a sequel tickle out of various movie related sites, and the cast has made themselves available for several group photos, only adding to fan anticipation of a new film. Of course, to date there has been no said sequel, nor has there been any official announcement that we should expect one. 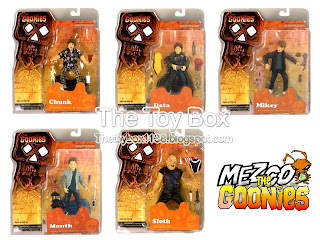 Much like the tease of a sequel, Mezco loves to tease fans and collector's alike by producing small series that have so much potential to soar, and then suddenly cease production and move on. Their 2007 line based on The Goonies fit this bill perfectly.

Five figures were produced in 2007 exciting fans of the film, and nostalgic collectors across the world - Mainly the USA. A major gripe about the series was that the sculpting was really hit or miss. While some of the figures were spot on renditions of the young characters, others were way off. While no official explanation as to why this was the case, it's possible that the licenses required to make accurate sculpts of the actors was too costly. Another issue that collectors had was that some of the heads seemed too big when compared to the body size of the figure.

Unlike a lot of toy lines, there are no known variants for the line. The five figures you see are all you get. Despite fan request, and the ability for Mezco to finish the series with the other characters from the film, the line has ceased with no official word that it has been canceled or not. While it's possible that a second series could be produced, we don't bet that one will - which is a real shame.

Join us next time when we take a look at Dragon's Lair 3D!