When Ren and Stimpy first hit air waves on Nickelodeon in 1991, it quickly came under attack from parental displeasure. Yes, it appears that even in 1991 parent's found it easier to blame specific shows for sending poor messages to their children rather than taking charge, and simply not allowing their children to watch it.

To be fair, for its time the show pushed many levels of grotesque to the furthest level possible, which is why kids loved it. However, it was never the intentions of series creator John K. to produce an educational show. Despite being severely censored and edited for television, the series quickly became a favorite of many kids, and today remains iconic to those now adults who now own the unedited episodes on DVD.

The original series ran for five seasons which encompassed fifty-three episodes. Each twenty-two minute episode contained anywhere from one to two cartoon shorts, as well as shorter animated comedic ads for products such as Powdered Toast, Log, and Dog Water. In the earlier days of the show, John K himself voiced Ren, while Billy West (Cureently voicing Fry on Futurama) voiced Stimpy. By the end of the series, West was voicing both characters, as well as the majority of the other characters portrayed.

In 2003 (to 2004) the series was re-launched under the title Ren and Stimpy - Adult Party Cartoon. It was aired only in the evening on Spike TV, and was rated TV-MA. The series took several new turns that didn't sit well with fans of the characters and original show. The main being the very obvious homosexual relationship tone the series set between the two characters. The show was so horribly written that Billy West declined to reprise the character Stimpy, saying it would damage his career.

Nine episodes were originally ordered by Spike TV, though due to consistent set backs and delays in episode completion the station pulled the plug after only three episodes aired. Today only seven of those nine episodes have been completed, and are available on the DVD Ren and Stimpy - The Lost Episodes. 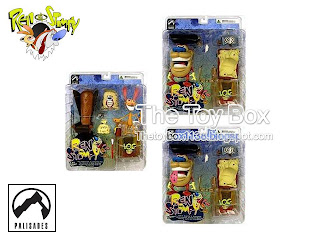 With the new show, the series was given an opportunity to have a new toy line.

Unfortunately there were only four figures produced (and three variants). This is due mostly in part to the inner workings of Palisade Toys, or rather the lack there of, which forced the company to shut its doors permanently shortly after the first series was produced. 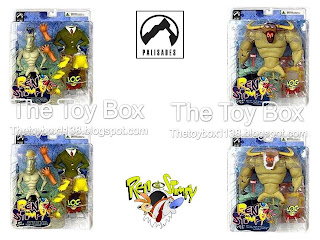 Something unique about this particular line is that the variants aren't all that good when compared to the originals. For example, rather than getting a regular Stimpy figure, the variant had a tongue sticking out of the figures mouth, and a spotted, sickly one at that. Another example of this is the Shaven Yak figure which the variant sports a lathered face. These variants just seem to detract from the figures as opposed to adding to them, which unfortunately turned many collectors off.

A nice addition to each figure was the inclusion of a "Log" accessory. For those who are familiar with the television series, the Log from Blamo jingle and commercial played a very predominant role in the show. 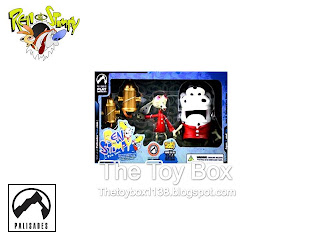 A two pack of Ren and Stimpy dressed in their fireman gear, sporting Dalmatian paint (as seen in the episode "Fire Dogs") was produced and sold exclusively at Wizard World in 2004. 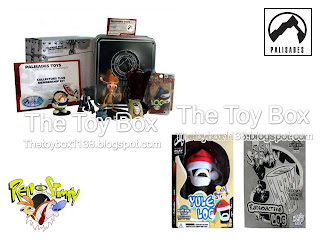 Following the Fire Dogs set was the exclusive Ren, which became known to collectors as the "Distressed Face" Ren. This particular tin was only sold via Palisade Toys collector's club in 2004.

Join us next time when we take a look at Happy Days!

Click "HERE" to go back to the home page. For more posts related to this one, please click the labels below.
Posted by The Toy Box on August 23, 2012
Email ThisBlogThis!Share to TwitterShare to FacebookShare to Pinterest
Labels: 2000's, John K., Palisades, Ren and Stimpy