Unfortunately for Dragon's Lair, the only thing that the majority of people seem to remember is that it was an agonizingly difficult video game series. They don't remember the amazing thirteen episode cartoon series which ran following the game's release from Ruby Spears on ABC, and even fewer people know about the small toy line that was produced by AnJon in 2002.

The story of Dragon's Lair began in 1983 with the arcade game of the same title. Utilizing the newest technology of Laserdisc, the game was able to push the envelope further than it had ever gone in the world of gaming. However the use of Laserdisc technology brought along with it limitations of its own, and a whole new level of problems. The game was animated by ex-Disney artist Don Bluth who had found a successful solo career the prior year with his film The Secret of NIMH.

Since its release it has seen two sequels, and several other games have been created using the same style of game play. The game is also only one of three games currently on permanent display at the Smithsonian in Washington DC (Pong and Pacman are the other two). Dragon's Lair was also the first game in arcade history to cost players more than a quarter to play. 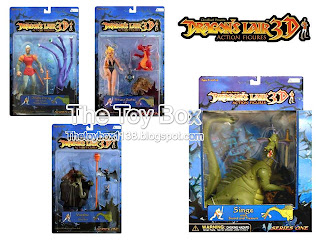 In 2002 the newly formed AnJon Toys acquired the rights to produce a series of toys based on the game/show. It would become their one and only product ever produced.

Despite its spot on sculpting, and impressive design, the series failed to find the company any foothold in the market. No exposure, a product that has a very small following of fans, and inability to market the product correctly left the company running in the red, forcing them to close their doors shortly after the series was produced. A second series was announced, but never got the opportunity to be produced.

Today, with the expception of these four figures, there is no sign that AnJon toys ever existed. A search of the web will yield very little information - None of which pertains to the sudden departure of the company.

The Dragon's Lair figures were a great product, but not one that many people were necessarily looking for. It's not to say that this line couldn't have found popularity in the long run, but it probably wasn't the smartest investment to base a start-up company on.

Join us next time when we take a look at Palisade's Ren and Stimpy!