Stargate is a cult classic film that has not only gone on to spawn several television series spin offs, but is currently fighting it out with two other well known Sci Fi "Star" titled films for number one among fans. Much like Wars and Trek fans, Gate fans make sure they are seen at the convention scene, and actor Richard Dean Anderson, the star of the television show Stargate SG-1 (which ended in 2007) makes several appearances a year to support the series as a whole.

However, today we're talking about the film itself. The one that started it all back in 1994. Dean Devlin and Roland Emmerich (who both went on to create the film Independence Day) created what would become the film as we know it today. The film starred two leads, both with their own story ark.

James Spader as Dr. Daniel Jackson, is a professor who has been shunned in the scientific community for his theories that the pyramids were much older than initially thought to be. This ties in to what the Stargate actually is, and where it leads to, backing up his theories. An interesting side note to Spader was that he didn't like the script for the film, but accepted the role anyway for the money.

Kurt Russell plays Colonel Jack O'Neil. The character of Colonel Jack O'Neil is an important role to the film as he is a character tormented by his son's accidental death. As a result, he has become suicidal, and when approached with a mission that he may never come back from, his character quickly accepts this as the solution to the problem. 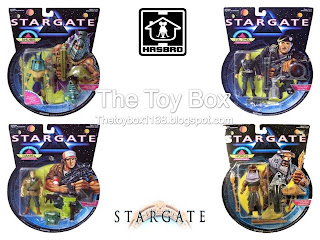 As it is with most movies, a toy line was sure to follow. Hasbro made sure of that in 1994 when they produced a small, but semi-successful line based on the film.

Right off the bat, the most noteworthy aspect to the series is the unique card. Not only is each one detailed with character specific artwork, but the packaging itself is not your typical rectangle card. The circular bottom, and almost triangular top make these figures stick out on any store shelf - Which probably helped significantly with the lines success. 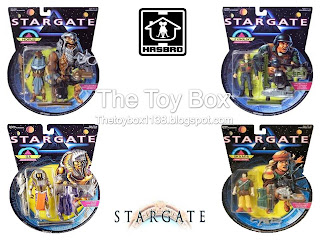 The series definitely had room to grow had it been more successful. Only a handful of the "main" characters were produced, and the enemies, with the exception of Ra, are all pretty standard characters.

The sculpts also leave little to desire in terms of character recognition, and in fact if un-carded, would be pretty difficult to determine who was who to the average viewer, or even what line they were from. The perfect example of this is Spader's character Daniel who looks absolutely nothing like him. Spader himself is a rather skinny guy, while the figure is buffed out, and doesn't resemble the clothing he wore in the film. 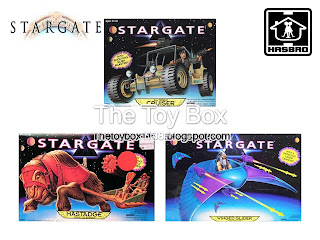 To round off the series were two vehicles and a creature. Only one of the vehicles was actually seen in the film - the Winged Glider. The other vehicle, the All-Terrain Cruiser appears to be just a standard military vehicle that was thrown in to give the "good guys" something to use. The Mastadge creature was seen briefly in the film, but we don't recall it having any sleds attached to the back.

The series came and went as quickly as the film did in the theaters, and much like the film has a strong following. Today there are more than enough pieces available on secondary markets to satisfy everyone looking for them, and as a result prices remain relatively low.

Join us next time when we take a look at McFarlane's Halo 3: Series 4-6!

Click "HERE" to go back to the home page. For more posts related to this one, please click the labels below.
Posted by The Toy Box on August 02, 2012
Email ThisBlogThis!Share to TwitterShare to FacebookShare to Pinterest
Labels: 1990's, David Spader, Hasbro, Kurt Russell, Stargate