These days are all
Happy and Free. (Those Happy Days)
These days are all
Share them with me (oh baby)
Goodbye grey sky, hello blue
There's nothing can hold me when I hold you
Feels so right, it can't be wrong
Rockin' and rollin' all week long

Happy Days itself is a spin-off from Love, American Style, and as a series that ran from 1974 to 1984 went on to spawn five more spin-offs of its own (not including animated spin-offs); Laverne and Shirley, Blansky's Beauties, Mork and Mindy, Out of the Blue, and Joanie Loves Chachi. Laverne and Shirley, and Mork and Mindy would go on to become more popular than Happy Days itself, but would not last as long.

The series included the likes of Henry Winkler, Ron Howard, Pat Morita, Tom Bosley, Scott Baio, and other common household names of the 70's and 80's, and ran for eleven seasons totaling 250 episodes. Several guest stars also made appearances in the show, including such high brow names as Tom Hanks, Lorne Greene and Cheryl Ladd. While the show was still in production, it also went into syndicated reruns. The reruns were entitled "Happy Days Again" to ensure viewers knew which shows were being re-aired, and which ones were new.

The most notable changes in the series occurred during seasons four, five, and eight. During the fourth and fifth season, new characters such as Chachi (Scott Baio) were introduced, and Pat Morita's character Arnold left the show. Ron Howard did not return for the eighth season (and beyond), and Ted McGinley (Revenge of the Nerds, Married...With Children) who portrayed the charcter Roger Phillips joined the cast. Despite all these changes, the series survived due to the popularity of the one mainstay character - Fonzie (Henry Winkler). 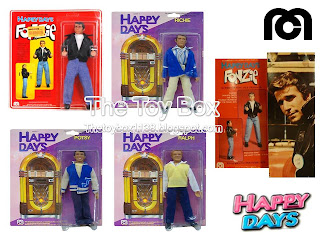 Even looking at Mego's 1978 line of the figures, it was clear that Fonzie was who people tuned in to see, and children wanted to be. The character was given his own unique card back, and unlike the other characters, wore his own unique (yet traditional for his character) clothing.

In fact, the character was so popular that a second figure - a boxed version - was put into production to keep up with supply and demand. 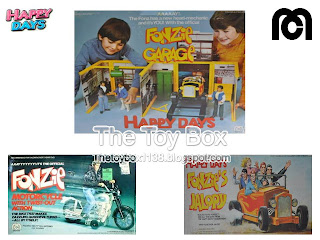 Despite the many sets that Mego could have produced on the series - Arnold's, Richie's Home, etc., they continued to focus on their main selling point, Fonzie.

Fonzie Garage, Fonzie Motorcycle, and Fonzie's Jalopy were the only three accessories produced to accompany the toys. For those who bought the garage, the jalopy was included. True to the standards at the time for Mego, the Garage consisted of mostly cardboard pieces making it difficult to find mint condition ones today.

Despite Happy Day's long run on television these were the only toys produced for the series at the time. It wouldn't be until 1998 that Premiere Toys would produce a small line based on the figure’s, sparking nostalgic collector's to seek out those long forgotten Mego renditions.

Join us next time when we take a look at Laverne and Shirley!