It's been a long time since our original post documenting the first three series of Halo 3 toys. Back when we wrote that, the series was relatively new. Series three had just come out, and series four had already been announced. Halo fans were chomping at the bit to get their hands on each new figure, despite the various repaints and exclusives.

To be a fan of Halo figures, it is essential that one have the following;

Let's talk about number one on that list. McFarlane Toys are expensive fresh from the factory. Each figure can set you back anywhere from fifteen to twenty dollars. These prices quickly skyrocket on secondary markets for certain figures (see number 3 below).

As far as number two is concerned, they're also incredibly difficult to find in one specific location, and that's not even including all those exclusives. To walk into just one store and find an entire assortment of figures from any given wave is next to impossible due to the limited amount of any one particular figure packed in cases. Supply often times fails to meet demand.

That's where number three comes in. Unfortunately a fair amount of collectors have had to turn to secondary markets to fulfill their action figure collecting needs. Sure it could be argued that on occasion the amount of money saved in gas from searching for said figures equals out to the price of a secondary market value, but who can be sure? Then you throw in all those difficult to obtain exclusives, which may or may not have a store location in your area, and throwing the fuel factor back into the mix may not be plausible to venture out for.

While these three factors are common these days for practically any line of action figures, it seems more so a counterpart to McFarlane toys. So what makes it worth it? We feel the toys speak for themselves on that regard. Great sculpts of characters, incredibly detailed accessories, and amazing packaging make it easy to fall into an OCD habit of tracking down figures. 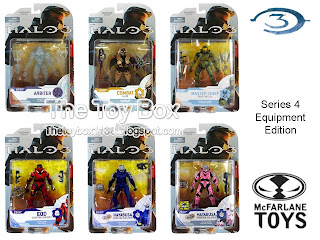 Unlike the prior series which included a set for campaign characters and multiplayer characters, the forth series simplified by making a series known as "Equipment Edition" figures. We haven't honestly figured out what makes these characters such an edition as they don't appear to come with any more accessories than the prior figures. In fact, some come with considerably less. Regardless, fans were so eager to collect them that pegs were soon empty from store to store. 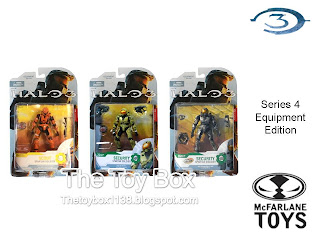 The Equipment Edition line consisted of nine figures, four of which were exclusive to specific stores.

The Griftball Spartan which was produced for and sold strictly at San Diego Comic Con was a nod at the fans who followed the Red Vs. Blue series. 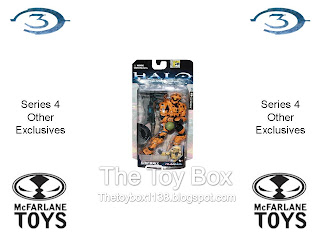 The armor pack sets are among fan favorites for their interchangeable armor, and vast assortment of weapons. Each pack had the ability to transform your figure into four different Spartan types.

By the end of the line, the series was titled simply as "Halo", and continued as such throughout the remaining line (series eight). 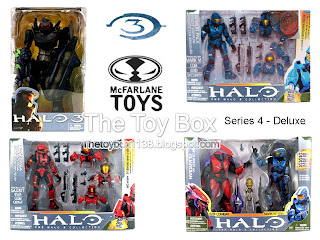 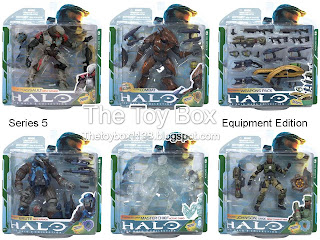 Series five launched with two of the most popular packs to date - Sgt. Avery Johnson, and the Halo Wars Weapon Pack. Not only is Johnson a fan favorite character, but in a series that for the majority consisted of various repaints, the figure was a welcome addition - something new.

The weapons pack gave collectors the opportunity to bolster their arms, and offered an incredible variety of detailed weapons. Some would argue that in the world of Halo the guns themselves are so unique that they stand out as their own "characters" in the story. 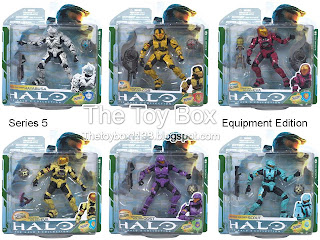 Series five, which was also considered to be part of the Equipment Edition, consisted of twelve characters - five of which were store exclusives at various locations. 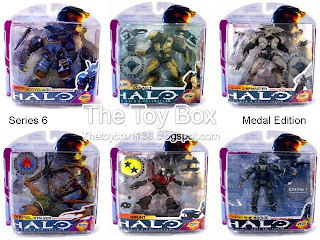 Series six pushed the Equipment Edition aside, and instead went with the all new series, the Medal Edition. Each figure came packed with a unique medal, and an impressive variety of weapons.

With the release of the new game, Halo 3: ODST, fans were eager to get their hands on the newly introduced Rookie figure. Despite the popularity of the figure, it seemed to be manufactured in abundance, and became one of the more common figures to see on pegs long after series six was replaced with series 7 despite the amount of sales. 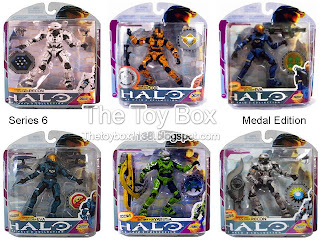 Out of the twelve figures produced for series six, half were store exclusives at various stores. To round off series six, McFarlane Toys produced a vehicle - three times over. While it can be said that this was technically not the first vehicles for the series (series one had three - Brute Chopper, Ghost and Warthog), unlike the prior vehicles these were designed to interact with the figures. The prior released vehicles were scaled down, and there was no possible way to interact your figures with them.

The sixth series Mongoose came packed with one of three different Spartan figures depending on which version you bought. McFarlane Toys was well up to its patented tricks of repainted rinse and repeat toys.

Though despite it all, Halo fans love the series, and continue to support it today. Halo toys have become one of if not THE top seller for the company, and we so no reason why they will stop producing them any time soon.

Join us next time when we take a look at Harry Potter and the Sorcerer's Stone!

Click "HERE" to go back to the home page. For more posts related to this one, please click the labels below.
Posted by The Toy Box on August 06, 2012
Email ThisBlogThis!Share to TwitterShare to FacebookShare to Pinterest
Labels: 2000's, Halo, McFarlane Toys, Microsoft, Video Game Toys, Xbox