Since we talked about Happy Days last time, we thought it would be fun/appropriate to look at a series of toys spun off from the show.

Laverne and Shirley stared Penny Marhsall and Cindy Williams, and ran for 178 episodes over eight seasons. During its run the show saw some drastic changes that were large enough to make or break the series. Some were accepted by fans, others were not so easy to forgive.

For the first five seasons the show was set in Milwaukee, however during this time there would be major revamps done to the series which then depicted the duo enlisted in the army, a drastic change from the girls original careers at Shotz Brewery as factory line workers. When season six started, the duo moved from Milwaukee to Burbank, California, now as truck washers for Shotz Brewery due to the automated bottling machine which replaced them in the factory.

The series began its official demise when Cindy Williams stormed off the set never to return during season seven. She claimed that the producers of the show were using her pregnancy as an excuse to slowly push her out of the series. Despite the sudden loss of the second half of the act, the series continued on for one more season, still using the name Laverne and Shirley - Though William's name was removed from the credits.

The series also included the fan favorite characters Lenny and Squiggy portrayed by Michael McKean and David Lander. The two had actually created and been portraying the characters since their college days. When the opportunity arose, they were seamlessly incorporated into the series. Long after the series finale, McKean and Lander continue to make appearances as the characters. 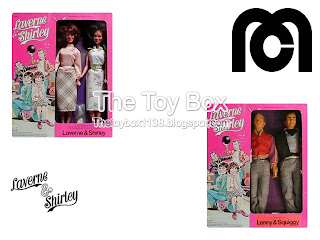 What's interesting to note about Mego's Laverne and Shirley line is that despite it being a spin off, it was produced as a toy several years before any based on Happy Days were. Also uncommon to the way it was produced, the "dolls" were released as two packs as opposed to individually boxed ones.

The two sets released were Laverne and Shirley, and Lenny and Squiggy. Despite the many more characters introduced in the show, production ceased shortly after these two sets.

A nice added touch to the boxes was the hand drawn caricature art which incorporated the left side. This is a very uncommon addition to packaging in the current age of Photoshop, and is very much so missed by collectors as it adds so much more “life” to the product.

The secondary market has not been as kind to the Laverne and Shirley dolls as other prior Mego dolls. A mint in box two pack, while rare, can easily be obtained for as little as $60.00 – Which is pretty much the same price you’re going to pay for brand new dolls released today. It’s possibly that this is because fans of Laverne and Shirley either don’t know about the dolls, or simply don’t care about them. Original supply could have also been greater than initial demand.

Join us next time when we take a look at one final spin-off series from Happy Day - Mork and Mindy!