Surely Lionel Richie can save me from the flat albums I've been listing to this past three weeks... 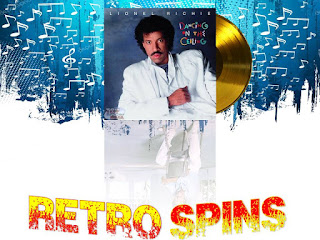 Dancing On The Ceiling isn't the monster that was Richie's prior album, Can't Slow Down. In fact, in comparison, it's quite the opposite spectrum. While this 1986 album has decent tracks on it, it's much slower pace doesn't keep me as interested as his prior entry.

Things start out nicely with the title track of the album and from there screech to a halt, tempo wise, with Se La and doesn't pick up from there. While this doesn't necessarily make for a terrible album, it too winds up just being okay. Something I was really hoping wouldn't be the case.

After hearing the whole thing, I can understand why Lionel Richie went on hiatus after it. It wasn't as big as his prior album, far from it, and while sales were phenomenal, a decline was definitely on the horizon. Best to quit while ahead. I'd gladly take Can't Slow Down over Dancing On The Ceiling.

Click "HERE" to go back to the home page. For more posts related to this one, please click the labels below.
Posted by The Toy Box on August 09, 2022
Email ThisBlogThis!Share to TwitterShare to FacebookShare to Pinterest
Labels: 1986, 80's Album Review, 80's Music, 80's Music Review, Dancing On The Ceiling, Lionel Richie, Music of the 80's, Retro Spins