Reaching 10,000 backers unlocked the first stretch goal, and Hasbro has announced that the H.I.S.S. tank will now include a set of attachable missile launchers. 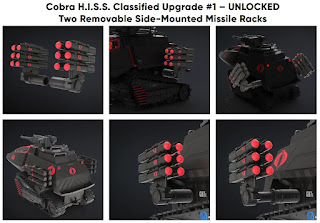 It was pretty obvious that something like this was going to be the first thing to be added to the project. The development team made sure to focus on the two "ports" that could have things attached to them during the initial announcement of the campaign.

I suspect Hasbro's announcements from here on out will make or break this campaign. We saw it with the Rancor HasLab, where by tier four unlocks the fans checked out, and the project was ultimately not funded. Hopefully, Hasbro learned from that mistake, and have "good" incentives for people to keep backing the project.

We don't want cheap cardboard cutouts that most of us can make with our printers at home, or repackaged figures. Keep it fresh, and keep it appealing.

And this is exactly what I'm talking about. 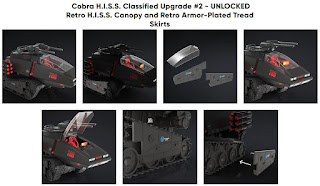 I don't suspect a classic style canopy and tread covers are going to excite many people to keep pledging (if they haven't already). Hasbro needs to up their game. The H.I.S.S. Tank is $299.99, and they need to put more meat on the bone to make it worth people's while.

I'm placing my bet now. The next unlock is going to be something even more useless, like blaster effects which can be put in the cannon barrels. Hopefully from there, the fourth incentive is worth while, but it will probably be a re-carded Jedi Knight Luke.

Like I said, Hasbro needs to announce something "big" if they want the numbers to keep rolling in.