After The Rockford Files, but before The A-Team, Stephen J. Cannell created The Greatest American Hero. Cannell took everything that was big about science fiction and super heroes at the time, and made a farce out of it with the personification of Ralph Hinkley, a bumbling substitute teacher bestowed with a super power infused costume by a species of aliens. 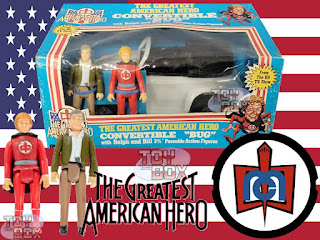 The show, which ran for three seasons, often found its comedic moments through the establishment of the lead character literally losing the instructions for how to use the powers imbibed within his suit. This would often lead to hilarious trial and error, as well as destruction.

Hinkley was aided by his FBI friend, Bill Maxwell, and divorce attorney, Pam Davidson, who also met the aliens who gifted the suit. Together, the formed a team set on fighting crime across the world.

Where the show faltered was its marketing. Geared at children, one would think that a toy line would have been a lucrative bit of side action. However, with the exception of Mego toys producing a Convertible "Bug", which contained a Ralph and Bill figure, there wasn't much more to be found, in terms of action figures.

It's interesting to note that the Convertible car is actually Pam's in the series. Yet Mego couldn't be bothered to create a figure of her to join the group in the package. 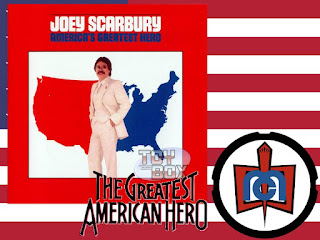 Regardless, this toy is not at all common on secondary markets these days, and can easily set you back thousands of dollars to get mint in the box. The most recent I have seen have been somewhere between five and eight thousand, and I've never seen a loose sample.

Probably the most popular aspect of the show, even today, was the theme song performed by Joey Scarbury. The track peeked on the Billboard charts at number two in 1981, and led to Scarbury recording and releasing his one and only album, America's Greatest Hero. Though initially only available on record and cassette, in 2005 it was released for the first time on CD.

Unfortunately, this version is now out of print, and can easily set you back fifty dollars to get it. Considering there's really only one good track on America's Greatest Hero, that's a pretty hefty price to pay.