1984, or MCMLXXXIV is my first official foray into the world of Van Halen. I'm familiar with the bands hits. I've heard the back and forth arguments over whether or not David Lee Roth or Sammy Hagar was the superior front man for the group. Beyond that, I don't know much more.

I chose 1984 because I've been repeatedly told it's the Van Halen album which really put them on the map. Mind you, it wasn't their first chart topping album, just the one that ushered them into mainstream music. 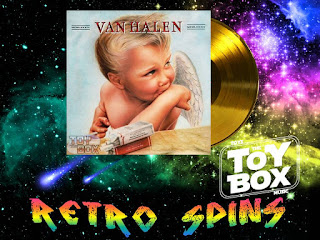 It's credited with being the first Van Halen album to incorporate synthesizers, and I dare say, a decision which I don't hate. The album sounds very 80's, but in a good way.

The album has its share of hits with the likes of Jump, Panama, Hot For Teacher and I'll Wait, and in addition to this there was one track which stood out for me; Girl Gone Bad. Five out of nine songs makes for a decent album, I suppose.

Being the last album featuring David Lee Roth, it actually leaves me wanting to go backwards from here into Van Halen's history. I've heard the Sammy Hagar songs, and honestly, I'm not a fan. Well, I suppose it's not fair to say I'm not a fan. More so, it's accurate to say I prefer the David Lee Roth tunes vs. Sammy Hagar's, but Harar's are okay.

Click "HERE" to go back to the home page. For more posts related to this one, please click the labels below.
Posted by The Toy Box on November 30, 2021
Email ThisBlogThis!Share to TwitterShare to FacebookShare to Pinterest
Labels: 1984, 80's Album Review, 80's Music, 80's Music Review, MCMLXXXIV, Music of the 80's, Retro Spins, Van Halen