Want a robot that will do your every bidding around the house? How about eleven of them? That was the goal of Tomy in 1980 when they released a series of robots in conjunction with their highly popular Omnibot 2000.

Omnibot worked by way of inserting a cassette tape into its built in player which you would record (and re-record) various commands on. In conjunction with its built in digital clock which featured alarms which could be preset to initiate the time frame in which each command would be executed made the robot one of the most advanced at home robots of its time.

Tomy produced multiple sizes of the Omnibot in order to make it affordable and accessible to as many households as possible. Of course, there was a downside to this. Downsizing from the original 2000 model meant smaller robots with less features. 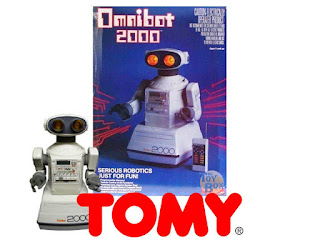 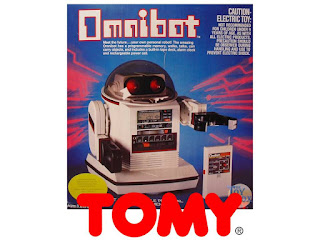 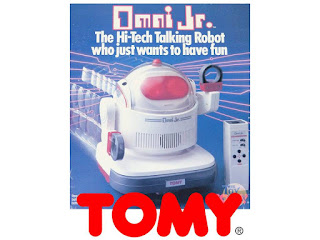 With the massive popularity of Omnibot, Tomy expanded the line into multiple different iterations. Dingbot (shown below) is actually the smallest iteration of the original Omnibot - Of course with very limited features. Spotbot was the ultimate robotic pet. It would wag and chase its tail and run around your room. In the event of bumping its nose into a wall would change directions. 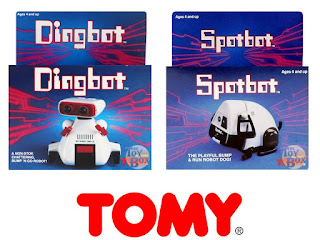 Flipbot didn't do much beyond run around your room looking for objects to crash over. Why? Because when it fell it would use its arms to right itself and seek out other objects to fall over. Dustbot was actually a miniature vacuum which would rove around your room looking for items to clean up. Be careful with your action figure weapons and accessories. If Dustbot found it on the floor, it was gone! 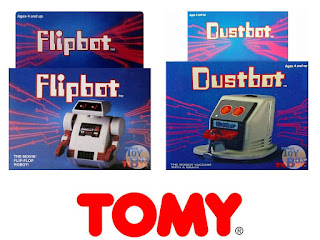 Crackbot roves around in circles waiving his arms and head in frantic motions as if he's lost his mind. When you make a sound, such as clapping, he'd stop, look around, and then continue on his mad frenzy. There was certainly a missed opportunity with Hootbot. He could have been the perfect digital alarm clock, but instead only hoots, flaps his wings and moves his head. Pity. 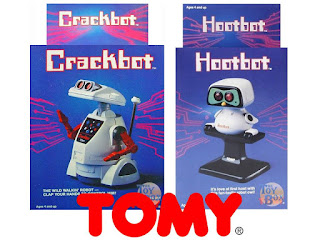 Chatbot was the ultimate butler. With his tray he could serve drinks, all while speaking. Verbot was a robot who could respond to minimal commands such as to come to you and smile. 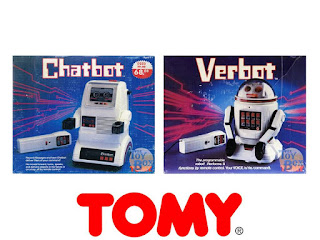 Tomy also produced a miniature line of wind-up toys called Pocket Bots. Each robot could walk when wound up and in some cases also swiveled their arms around. Cool if you're into wind up toys and / or robots, but really nothing more to them beyond that. 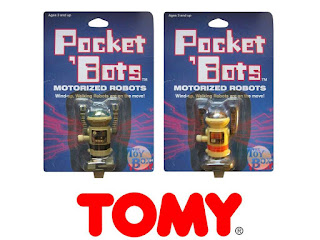 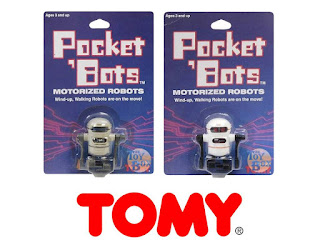 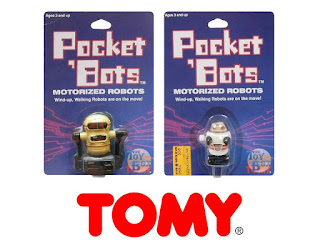 The last item produced for Omnibot was the Robot Link from Computer Magic. This software and link cable allowed you to pre-program your robots via your personal home computer saving on time and batteries. It also allowed for you to extend the minimal programming of the robots through additional commands. 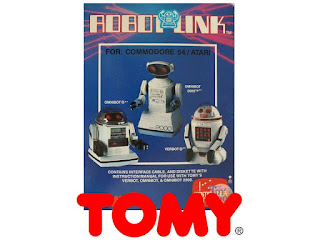 It's unfortunate that these days most Omnibots (and related robots) are sold for parts due to the majority of them not working or the controllers missing (which render them 100% useless). As such, if you find one in a tested and working condition with all its facets you can expect to pay quite a bit. Because prices are all over the place, it's also difficult to determine what the price point is. We've seen them sell for around $250.00 and we've seen them sell for a lot more. The determining factor seems to be the buyer - Which we suppose is always the case anyway.

Click "HERE" to go back to the home page. For more posts related to this one, please click the labels below.
Posted by The Toy Box on December 03, 2018
Email ThisBlogThis!Share to TwitterShare to FacebookShare to Pinterest
Labels: 1980's, Bots, Omnibot, Omnibot 2000, Tomy